Microsoft is browbeating users of one of its products in a fairly unique case of overzealous virtue signaling, linked to the social upheaval in the wake of the death of George Floyd.

The unlucky customers here are developers who use Webpack – once a free and open-source tool for building and deploying sites and web apps, that is now owned by Microsoft.

And while Webpack remains “free as is beer” – the “free as in freedom” element is now subject to the tech giant’s Code of Conduct, while the software is managed by the Microsoft team.

The way Microsoft decided to show its solidarity with the Black Lives Matter movement and its concerns over racism, was to earlier this week disable access to Webpack’s large documentation library – an essential element of the tool, given the complexity involved in configuring it.

Instead of accessing the documentation they need to do their work, developers were temporarily greeted with a message from the Microsoft product, entitled, “BLACK LIVES MATTER,” that then explains the files have been temporarily disabled “out of respect for George Floyd” and other Black victims of police brutality. 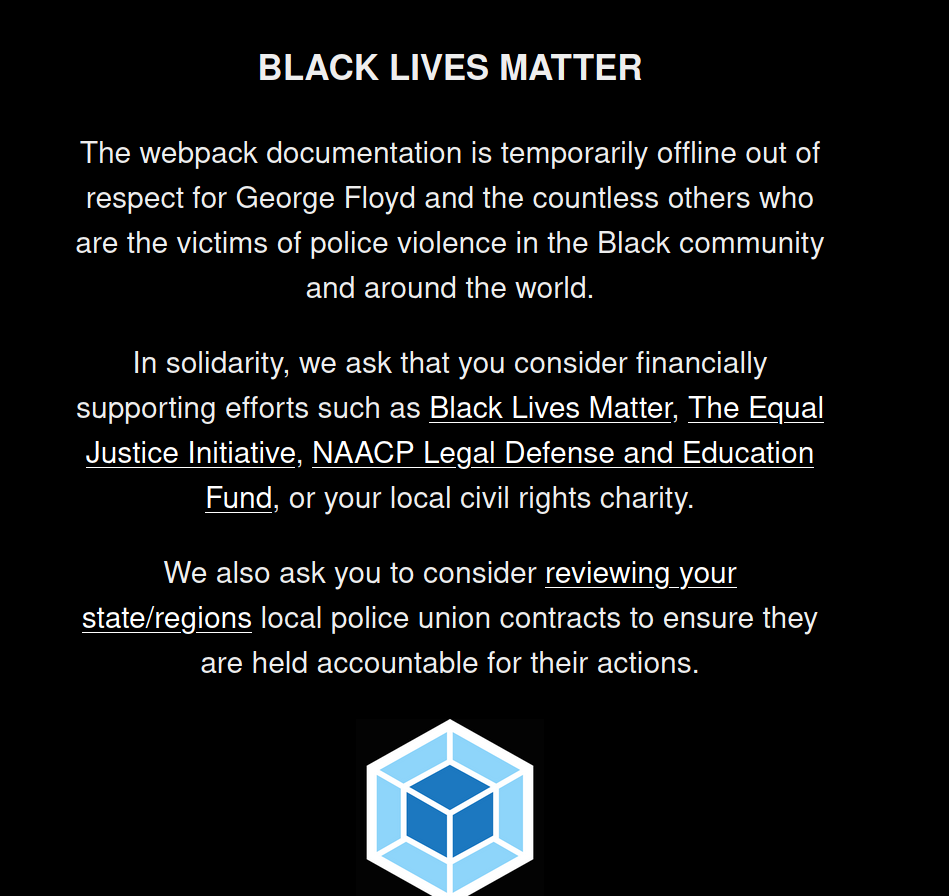 The message also urges Webpack users to donate to organizations such as Black Lives Matter, the Equal Justice Initiate, and others.

The software’s users are further asked to “consider reviewing your state/region’s local police union contracts to ensure they are held accountable for their actions.”

When a developer opened an issue on another Microsoft-owned property, GitHub, where Webpack’s code is hosted, complaining about the decision to deny access and asking for the documentation website to be restored – since “some of us have day jobs and deadlines” – the response was to block him. 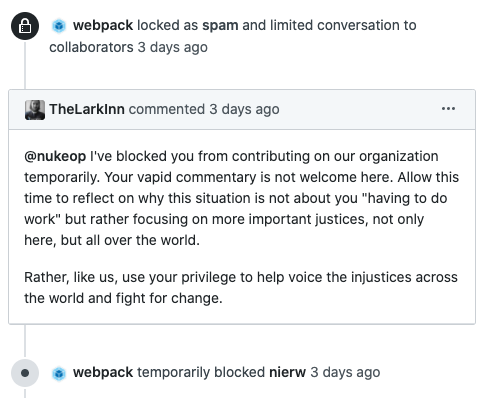 In a time of economic downturn and millions of jobs lost due to coronavirus lockdowns, the explanation for the block came across as somewhat tone-deaf: “Allow this time to reflect on why this situation is not about you ‘having to do work” but rather focusing on more important justices, not only here, but all over the world.”

The developer’s comments were also dismissed as “vapid” and “unwelcome here” – and he was called out for “privilege.”

Instead of “vapidly” asking to be allowed to do his job, the developer is advised to “like us, use your privilege to help voice the injustices across the world and fight for change.”

What we’ve learned here that even when it’s not outright evil like in the past, when it was on a mission to destroy open source projects – Microsoft simply can’t shed its old habit of taking things too far.