The third time he's been sanctioned over the last 30 days.
Share 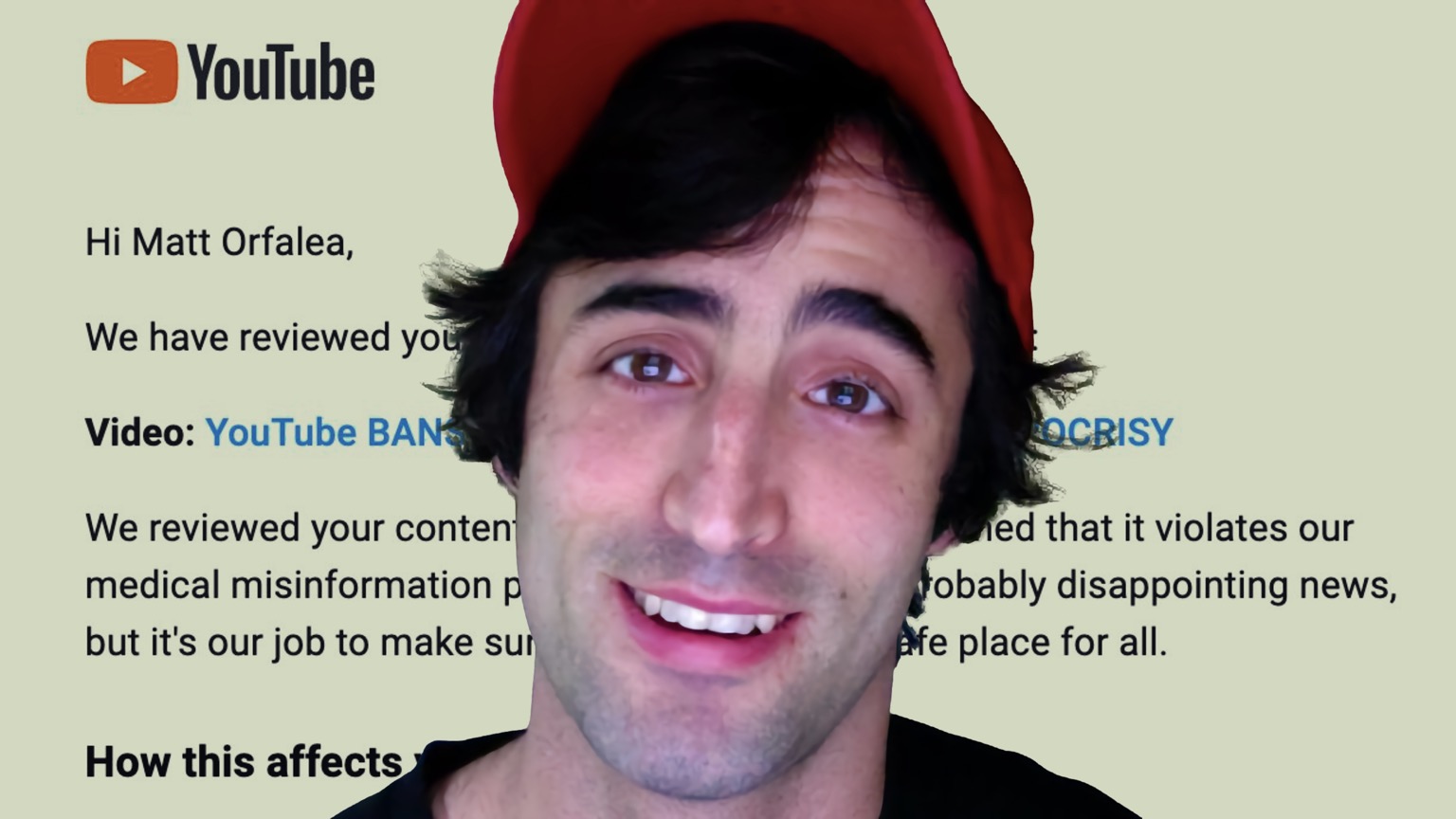 After he published a video discussing YouTube’s censorship last month, video producer Matt Orfalea was censored and had his channel demonetized. Now, YouTube has targeted Orfalea once again and removed another video where he and his guest, independent journalist Alison Morrow, called out the tech giant’s censorship.

This censorship began in June when Orfalea’s YouTube channel was suspended for uploading what he described as “unpublished rough cuts” of a video highlighting YouTube’s censorship of ivermectin.

Orfalea was then demonetized in July after YouTube flagged a seven year old, 13 second parody video for allegedly violating its “violent criminal organizations” policy. After facing backlash, YouTube admitted “error” but did not re-monetize his videos.

A few days after Orfalea was demonetized, he was a guest on Morrow’s channel in a video where she highlighted how mainstream media outlets are allowed to violate YouTube’s “medical misinformation” policy without facing sanctions. This video was censored and then reinstated after YouTube faced pushback for taking it down.

In the “YouTube BANS Reporter Exposing YouTube HYPOCRISY” video, Morrow suggested that her video may have been removed because of Orfalea’s guest appearance and speculated tat YouTube’s artificial intelligence (AI) could be flagging people that have previously been sanctioned by YouTube and then censoring videos from other creators that associate with those that have been flagged.

“This is just a perfect example of what’s happening now,” Orfalea added. “Where we have this cast system, this blatant double standard…so clearly, as you’ve described, this is not about protecting viewers from misinformation, this is about allowing, you know, some privileged class of journalists…corporate media and allow them to say things without being challenged.”

Shortly after Orfalea posted this video where he and Morrow criticized YouTube for its censorship, YouTube took it down for allegedly violating the platform’s “medical misinformation” rules. 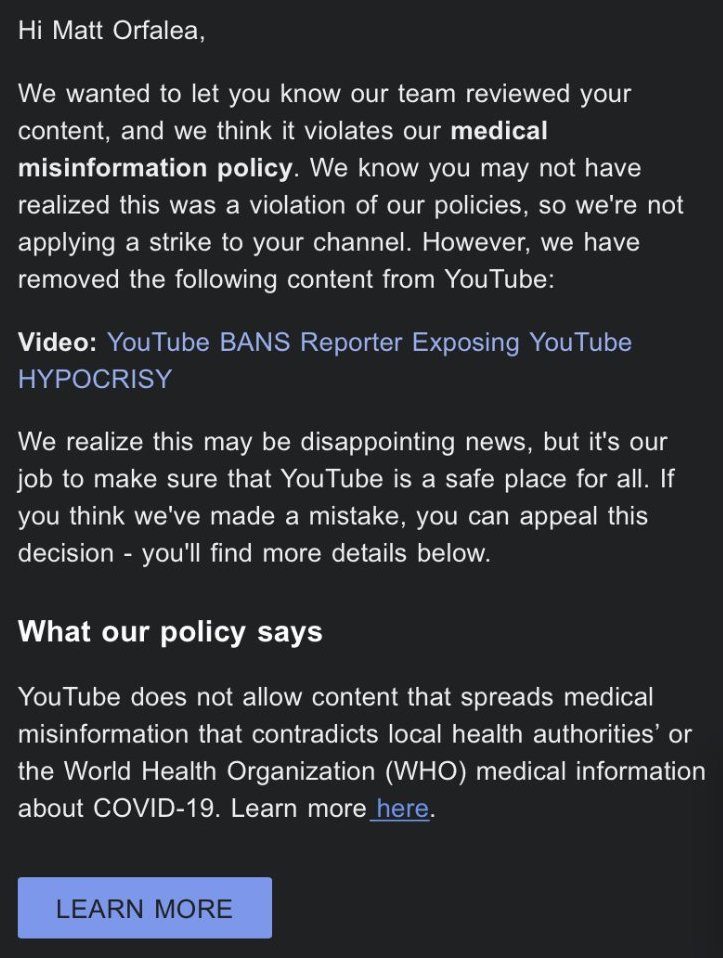 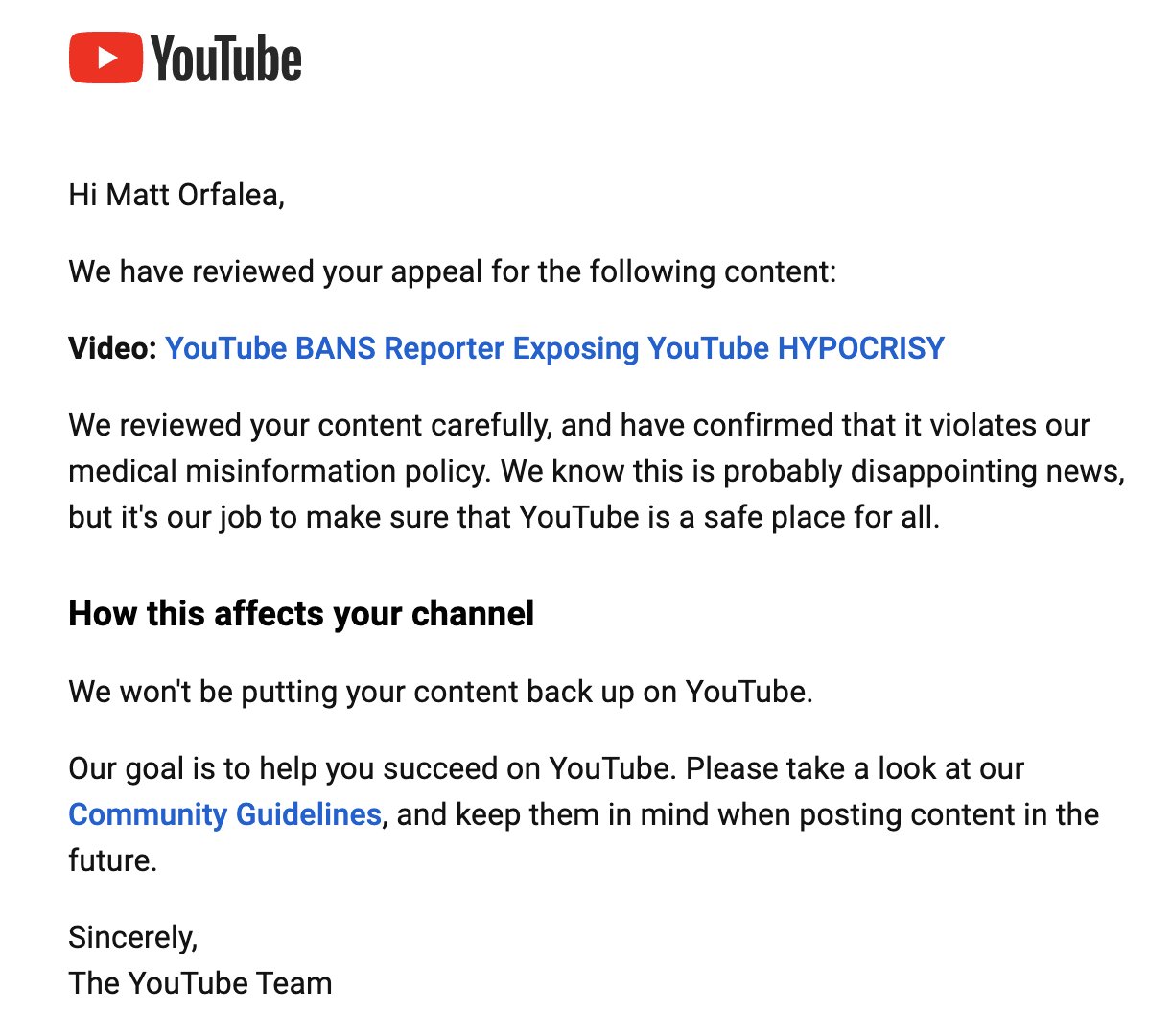 “I’ve been dealing with this insanity for almost a full month now,” Orfalea said after YouTube rejected his appeal. “YT reinstated Alison’s video. So they should reinstate my video, referencing hers, too!”

YouTube’s consistent targeting of Orfalea is reflective of the double standard on YouTube between independent creators and mainstream media outlets that he called out in this now-censored video.

YouTube’s CEO Susan Wojcicki has also admitted that the platform’s recommendation algorithm was changed in response to the media’s radicalization theory and said the platform won’t recommend YouTubers for breaking news.