An independent creator is again forced to rely on public backlash to get a video reinstated.
Share 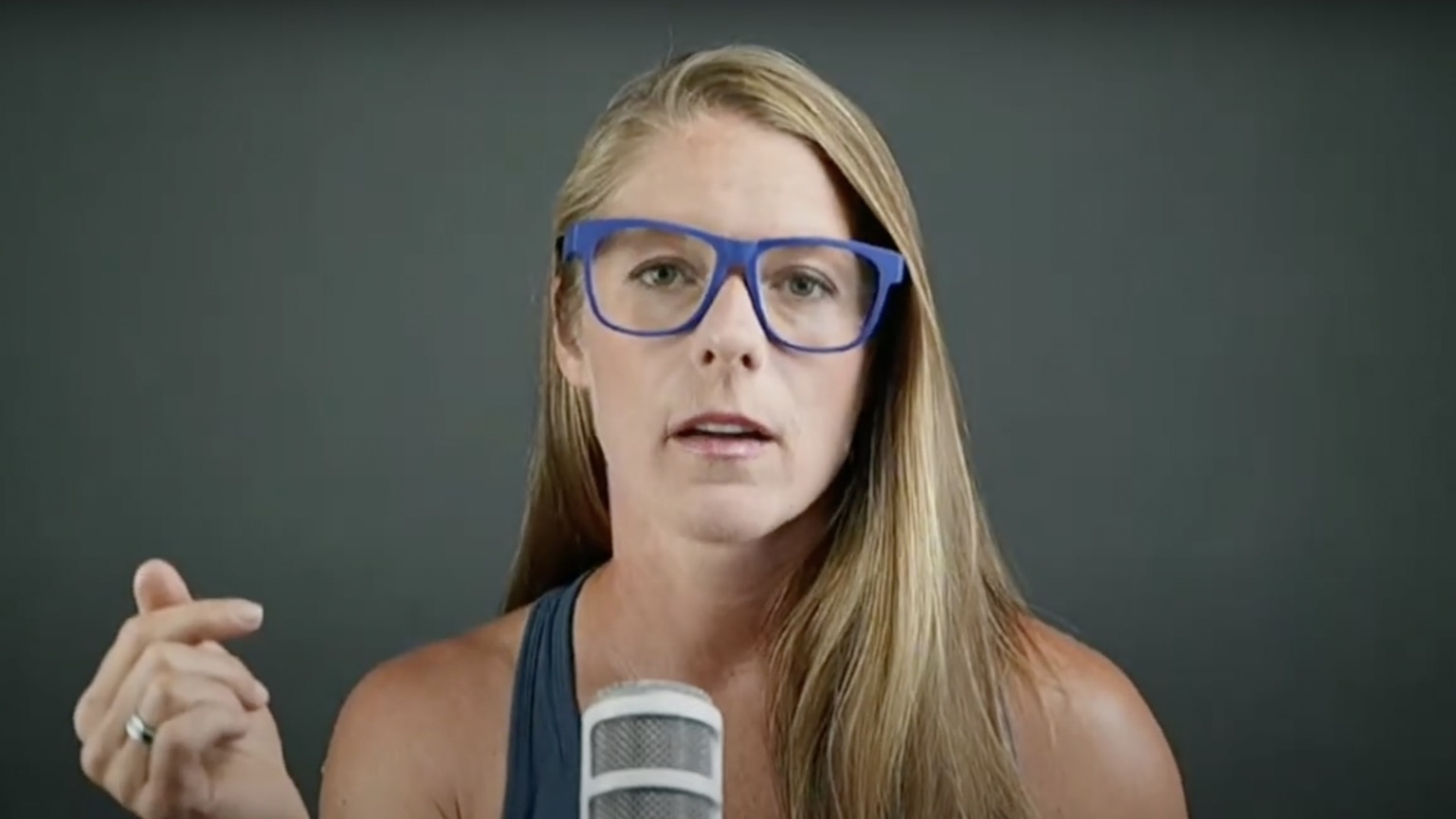 YouTube censored and suspended the channel of independent journalist Alison Morrow after she posted a video highlighting several examples of the mainstream media violating the “medical misinformation” rules that are regularly used by the tech giant to punish independent creators on the platform.

After facing mounting backlash over the decision, YouTube reinstated the video.

The first example showed a February 2020 clip from the NBC News YouTube channel where one of the presenters states: “Experts caution, masks are not always the answer.” Another presenter states: “If you’re sick or somebody in the family’s sick, then doctors say the mask is an effective way to prevent that virus from spreading, but in a public place, not so much.”

The second example showed a March 2020 clip from the CNN YouTube channel where its Chief Medical Correspondent Dr. Sanjay Gupta discusses the coronavirus and says “there’s some solace in this idea that the vast majority of people aren’t going to get sick from this” and “this is reminding people, I think a little bit, of, of, just flu in general.”

Morrow noted that both of these corporate news clips violate YouTube’s current medical “misinformation” policy but have not been removed with the first clip violating the rule that prohibits claims “claims that masks do not play a role in preventing the contraction or transmission of COVID-19” and the second clip violating the rule that prohibits “claims that the symptoms, death rates, or contagiousness of COVID-19 are less severe or equally as severe as the common cold or seasonal flu.”

She also emphasized that YouTube’s medical misinformation policy is antithetical to the purpose of both science and journalism:

“How is science not always going to be medical misinformation, if science is the very practice of discovering new things? It’s just impossible to do science on YouTube or journalism for that matter. You can’t really do journalism on YouTube unless you’re a corporate entity because obviously journalism is also about questioning narratives and proposing new ideas and you can’t do that if the community guidelines are all about protecting the status quo.”

Morrow then suggested that the purpose of YouTube’s medical misinformation policy is to create “a cast of safe characters that are basically part of the same corporate class as YouTube” and notes that “you could even be saying the exact same thing the corporate news is saying” and still “face the consequences that they are not going to face.”

To illustrate this point, Morrow pointed to YouTube’s recent censorship of Orfalea under its medical misinformation policy where he was suspended for uploading “unpublished rough cuts” of a video highlighting YouTube’s censorship of ivermectin that he had already deleted before the suspension was issued.

Morrow argued that this suspension “doesn’t even make any sense” because the medical misinformation policy is supposed to be focused on preventing people “spreading” misinformation.

“You have to be actively spreading it,” Morrow said. “You [Matt] even had this video, it wasn’t spreading because it wasn’t there. It wasn’t even, it wasn’t public, and they still went after you for that.”

Orfalea added: “It wasn’t public and I had deleted it after they gave me a warning. I’m sorry I’m repeating myself but this is insane.”

In addition to criticizing YouTube’s inconsistent application of its medical misinformation policy, Orfalea also criticized YouTube for demonetizing his channel over a seven-year-old parody video and foreshadowed the censorship and reinstatement of this video by noting that the “only hope” smaller channels have for getting erroneous censorship decisions overturned is to create a “storm” on Twitter.

The video concluded with Orfalea stating: “Mainstream media corporations, they’re obviously on a different playing field, they’re not treated the same. If they did get treated the same or if they, the rules were enforced the same way, their channels would have been removed a long time ago.”

After this video was posted, YouTube highlighted the point Morrow and Orfalea were making in the video by removing it and issuing a strike on Morrow’s channel which prevented her from uploading or live streaming for seven days. 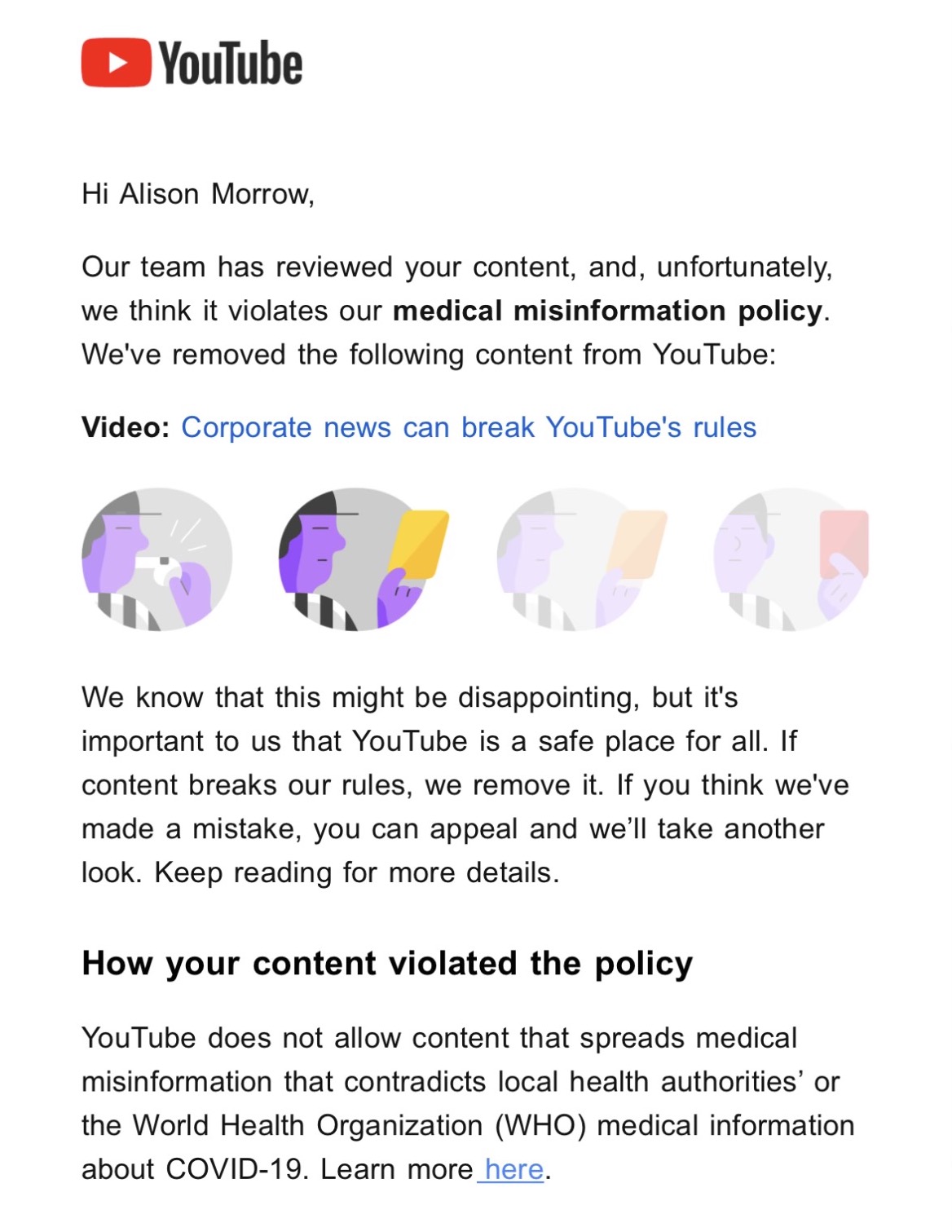 “After exposing how corporate news is allowed to break @YouTube’s #Covid misinformation rules by showing videos still up on @NBCNews and @CNN channels, #YouTube has suspended ME – not them,” Morrow tweeted in response to the suspension. “This proved my point: YouTube targets independent creators and leaves legacy press alone.”

She continued: “The deck is stacked and it should be clear to anyone breathing that this is not about silencing dangerous ideas or misinformation – this is about protecting a specific class of information disseminators. And finally, to all my former peers in mainstream media, it’s time to get real about the dangers a communication oligarchy poses and stop cheering censorship – it’s embarrassing and antithetical to journalism.”

Orfalea also blasted YouTube for suspending Morrow while allowing CNN’s video to remain on the platform:

“THE INSANITY CONTINUES! YouTube just suspended @AlisonMorrowTV after removing a video of us discussing how “Corporate news can break YouTube’s rules”, showing how corporate news spread covid misinformation. Instead of suspending CNN, Alison is now suspended for EXPOSING them!!!”

Morrow appealed the removal of the video but it was denied. 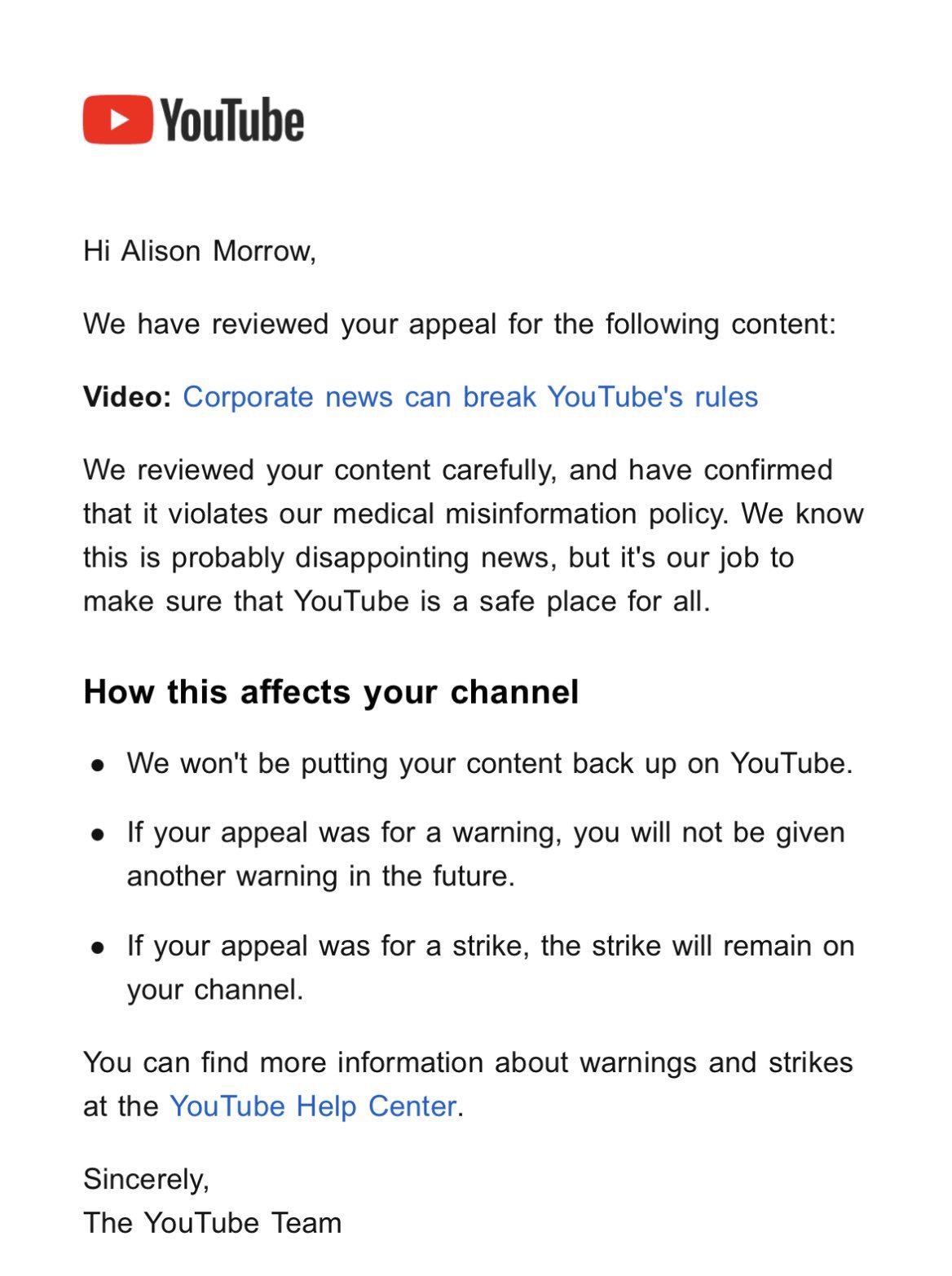 “@TeamYouTube has DENIED my appeal after suspending me for showing @NBCNews & @CNN videos that are still up,” Morrow tweeted. “If @youtube really cares about ‘misinformation’, why are CNN & NBC videos allowed while I’m locked out of my channel for exposing them?”

“Rules so nebulous they can apply to anyone, everyone and no one at the same time,” lawyer Viva Frei tweeted. “I have never seen anything remotely objectionable on @AlisonMorrowTV channel.”

Journalist Kristi Leigh added: “Independent media under attack while corporate media lives on. So much for ‘voice for the voiceless.’ Only those with the most money and power get to be heard on the largest platforms.”

And after facing this backlash, YouTube then reinstated the video, and in doing so, highlighted another point that was made by Orfalea in the video – that smaller channels often have to rely on getting attention on Twitter to get these types of censorship decisions reversed.

Morrow responded to the reinstatement of her video by noting that most small creators don’t have the time and energy to “constantly be hawkish over YouTube” and so “you’re basically stuck here just waging Twitter wars wondering what’s going to happen and it’s a terrible way to do business.”

Morrow’s experience is one of many examples of how mainstream media outlets aren’t held to the same standard as independent creators on YouTube.

At the start of the pandemic, YouTube automatically demonetized independent creators that mentioned the coronavirus while allowing mainstream media “news partners” to monetize. This disparity continued for almost a month before YouTube eventually changed the rules and allowed all creators to monetize (although even with this change, there were still some caveats).

And mainstream media outlets were called out in early 2020 over clips that used footage from an Italian hospital to describe conditions in New York City. Yet these clips are still on YouTube today.

Outside of the coronavirus, mainstream media outlets are given explicit exceptions to YouTube’s “hate speech” rules and artificially boosted via YouTube’s algorithms.