Apple continues to compromise its ethics to stay in the Chinese market.
Share

Just as Apple is being challenged in some corners for slowly backing away from serving, in good faith, the open and democratic RSS web feed tech when it comes to the way it dominates podcasting discoverability and search market – other products building on the venerable RSS are also viewed as disposable by the tech giant.

If, that is – the price, and the market, is right.

Like so many times before, the one market that Apple’s “need for greed” just can’t ignore is that of China and its 1+ billion customers with increasing access to disposable income, and a passion for shopping branded “status” products.

Therefore, Apple is really out to protect its core and very lucrative hardware business of “aspirational” hardware in China – when it time and again throws “minor” components of its ecosystem right under the heavy bus of China’s internet and tech censorship.

This time, it’s the turn of apps like Reeder and Fiery Feeds, RSS aggregators. These two will shortly be gone from Apple’s Chinese store, joining Inoreader that got removed three years ago.

The US giant is “in the process” of deleting these apps from the Chinese version of its app store, as Beijing’s laws deem them to be providing content illegal in the mainland. 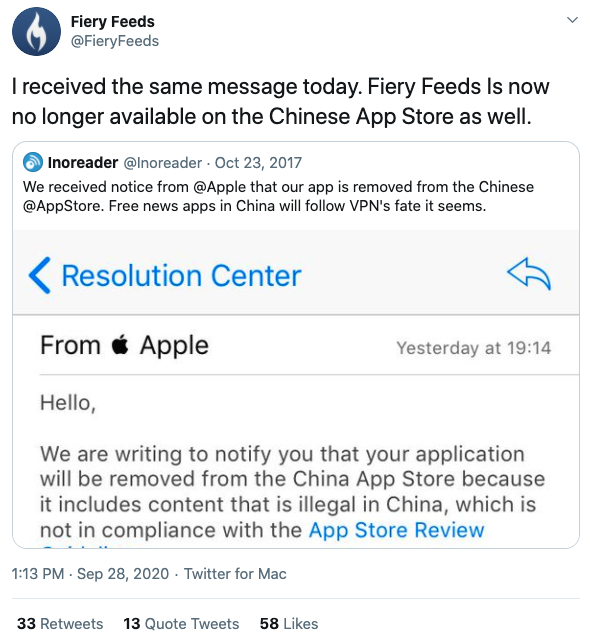 When Fiery Feeds announced the email they just received from Apple alerting them that content featured in the apps was illegal in China, they linked to the same warning received by Inoreader three years earlier.

The Apple fan website Daring Fireball mused about this in a short post, appearing to go into the tech behind it all, and apparently unable to understand why China would make a distinction between an RSS web feed and a browser – and then why not ban them, and the referred websites, all?

“I suppose there’s not much point looking for sense in this decision - China is going to China,” the writeup said.

But there may be much more point in realizing that – “Apple is going to Apple”?

After all, Apple has in the past complied with a number of Beijing’s takedown orders concerning apps published by VPNs, Hong Kong protesters, and a whole lot in between.