The suit claims Hughs made an "attempt to muzzle an ideological opponent" through wrongful use of the copyright law.
Share

YouTuber Carl Benjamin, of the channel Sargon of Akkad, is asking to be awarded attorney’s fees in a case resulting from a lawsuit brought on by fellow YouTuber Akilah Hughes, that he has in the meantime won.

Previously, Hughes lost her copyright infringement lawsuit filed in the US against Benjamin, a UK-based creator.

The two fall on the opposite sides of the liberal vs. conservative divide, and the online and legal row between them erupted in the aftermath of the 2016 US presidential election.

But after a US judge recently ruled to dismiss Hughes’ allegations, Benjamin decided to sue for legal costs, asking to be awarded a total of some $39,000.

In summarizing the case, the filing mentions that Hughes – a Hillary Clinton supporter – is a YouTube celebrity who was been publicly mocked for her political opinions by Benjamin; the way he did this was to use Hughes’ own video recorded during Clinton’s election night party in New York City.

Hughes responded by claiming copyright breach, but Benjamin defended himself citing the fair use protection, an argument that the court eventually accepted as valid.

One detail from the ruling was that the judge found that although Benjamin did not add any of his own commentary to his own video, based off of clips that had been posted by Hughes – the power of editing sufficed to produce a new expression of an idea – in other words, what is protected under US copyright law as transformative work. 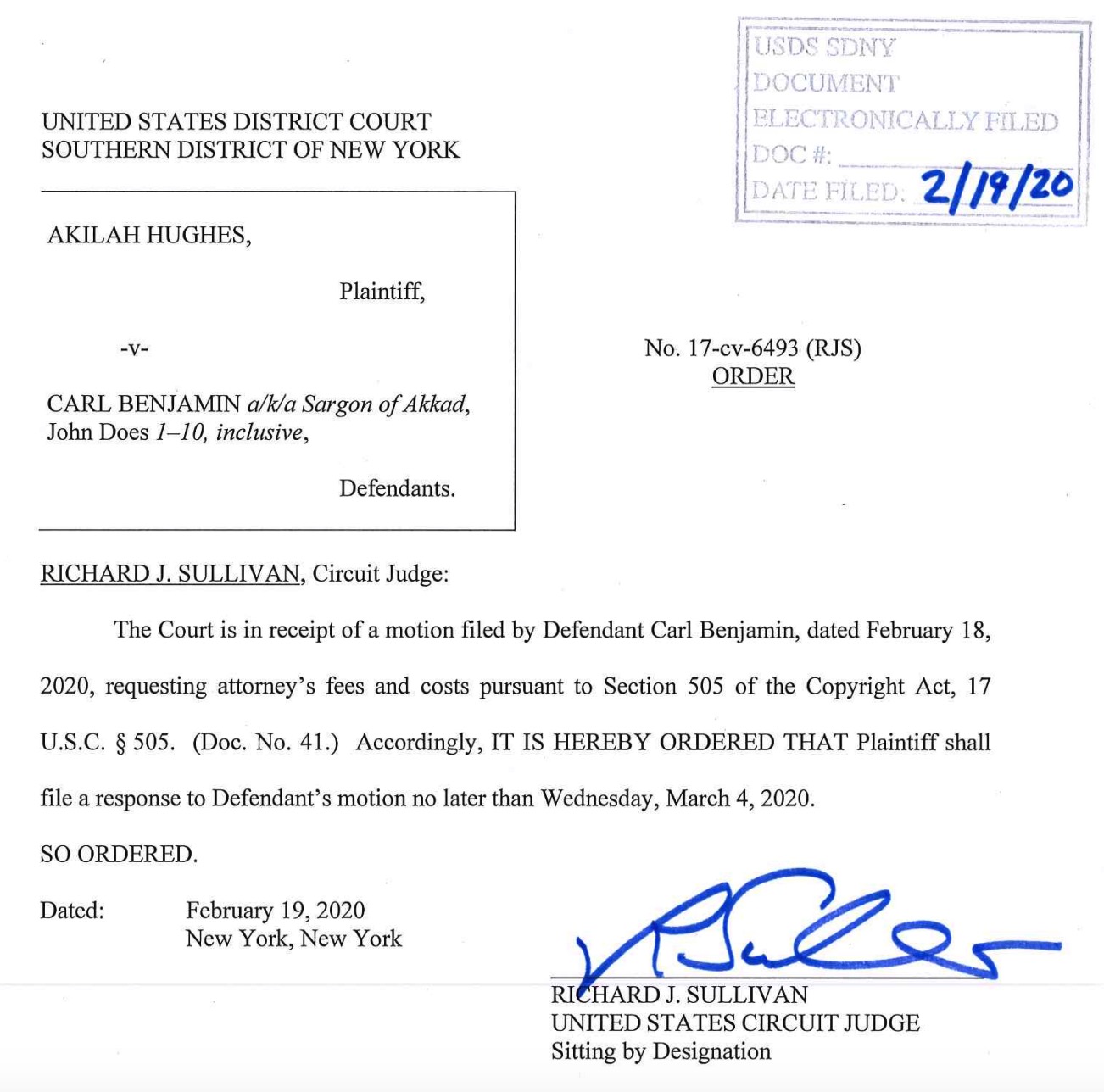 The crux of Benjamin’s argument has been that the lawsuit against him was essentially “weaponizing” the copyright law in order to win a political argument and exact ideological revenge – rather than actually make a valid copyright claim.

“As part of the same tactics, Plaintiff later publicly suggested on Twitter that she had “reported” Defendant’s “hate content” to Patreon in an attempt to have Sargon banned. And, in keeping with her strategy to repurpose copyright law as viewpoint-based censorship, she reblogged with apparent approval a suggestion to “drown out fascists” not by criticizing their viewpoint, but rather by “bring[ing] a speaker [to] play copyrighted music at their rallies cause it will be easy to report their videos & get them taken down … .”

All that’s left now is to see whether or not this multi-year saga will have its conclusion in the court awarding Benjamin the legal fees as well – but much more importantly, if the case might discourage future attempts to (ab)use copyright law as a weapon against political opponents on the internet.

Read the supporting argument to the filing here.