Celebrity doctor Drew Pinsky announced on Twitter that one of his YouTube videos that featured a conversation with another physician received a strike on YouTube and was removed.

He said that he presumed people who were not medical professionals are making decisions about what qualifies for accurate medical information.

“Do you trust a 23yr old computer coder with your life?,” he asked. 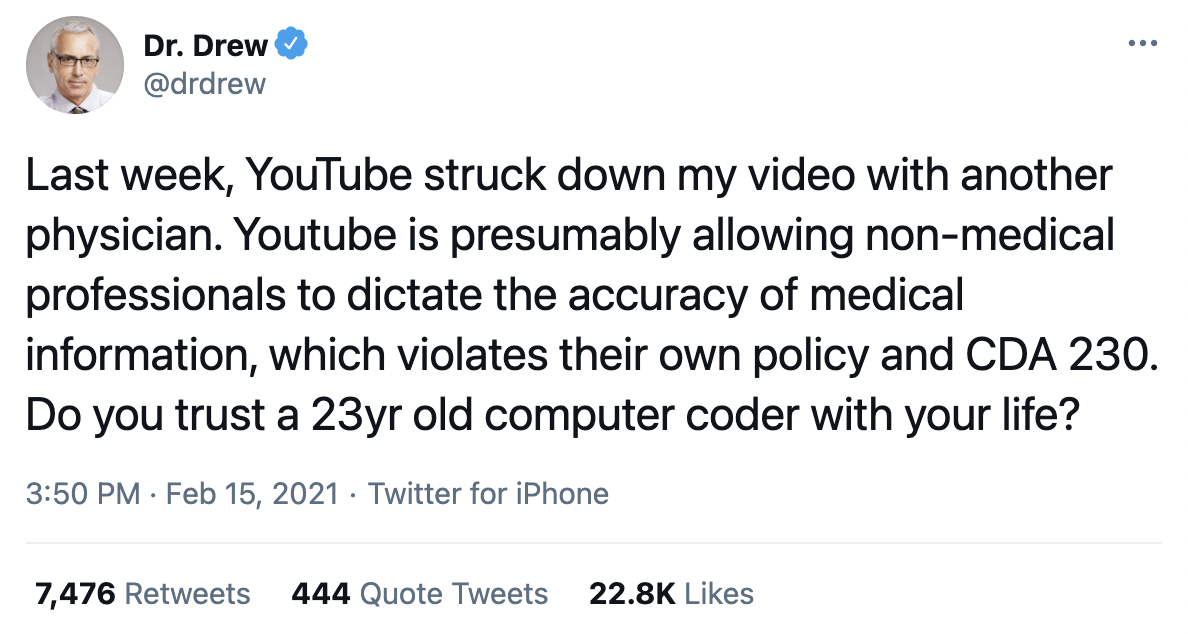 Appearing on the Rubin Report along with another doctor, Zubin Damania, and lawyer Viva Frei to discuss censorship on Big Tech platforms, Dr. Drew was asked about the short period of time when he was demonetized on YouTube, to reveal that he was in fact deplatformed for a week and threatened with permanent depltforming.

He said he received a list of policies that must be respected, but that those were in no way relevant to his content.

The only thing that might have triggered the censors, according to Dr. Drew, is the fact that he had Covid and was talking about the status of his immunity, which he added had been measured – and that it appears discussing immunity is a “touchy” subject for YouTube.

But another “touchy” topic, i.e., one that gets censored easily on the Google-owned platform, are various forms of treating the disease, something Dr. Drew “confessed” to also speaking about in one of his videos, when he discussed this with an anesthesiologist.

Dr. Drew reiterated that it was particularly frustrating to have non-medical professionals deciding what board-certified physicians are allowed to talk about – something that he says is “wrong and bizarre.”

Dr. Zubin Damania shared his experience on Facebook, where his page was set up 10 years ago, that now over 2 million followers, was at risk of being “unpublished” with no explanation and no recourse. Facebook only said that community standards had been violated – something he was unaware of having done. Meanwhile, trying to click to appeal revealed an inactive, grayed-out button.

Damania also said that his content about vaccines that was “pro vaccine” had been labeled as “potential misinformation by independent fact checkers.”

According to Rubin, these and similar incidents that are becoming more and more frequent mean that censorship is preventing honest medical and legal conversations.