YouTube’s practice of removing content for no reason and without explanation continues: A gamer and organizer of charity livestreams on Saturday had the stream disappear for “a violation of guidelines.”

But the giant platform’s bizarre move was quickly reversed, Sean McLoughlin, aka JackSepticEye, announced on Twitter. 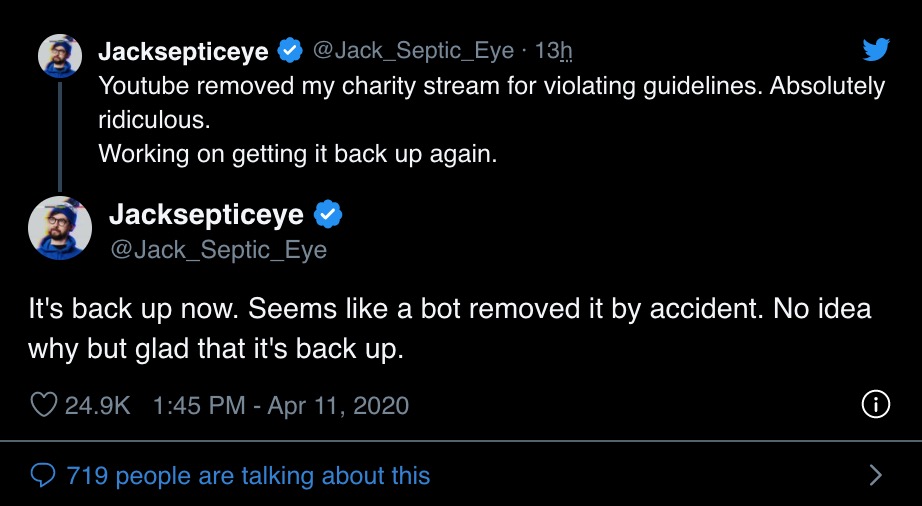 McLoughlin clearly hasn’t been told by YouTube why the incident happened in the first place, because he speculates, “it seems like a bot removed it by accident.”

The fact that McLoughlin has over 23 million subscribers on YouTube couldn’t have hurt his chances of getting heard by the platform and having his problem fixed, because YouTube isn’t entirely insensitive towards its biggest stars. It’s mostly smaller creators who suffer.

In either case, having videos or a channel struck down or deleted is the biggest nightmare of YouTubers, especially those with a large following who make serious money on the platform – so when YouTube reverses such decisions, these creators’ relief is such that they by and large forget to ask or explore what had actually happened.

However, McLoughlin is not only making money on YouTube, he is also raising a lot of it for charity, which makes the luckily short-lived removal of his stream by YouTube all the more distasteful.

McLoughlin on Tuesday managed to use his considerable YouTube powers for the good and raise more than half a million dollars to help fight the coronavirus pandemic.

It took McLoughlin and his followers less than five hours to collect this money via the YouTuber’s coronavirus charity live stream.

And while his situation was resolved quickly, it is evident that something is wrong with the way YouTube polices content on the platform, and with the measures it applies to correct what is identified as a problem.

Reports about unexplained (perhaps inexplicable) removals of videos, warnings, strikes, and shuttering of entire channels are not getting any fewer – on the contrary.

But it’s also patently obvious that YouTube feels this is not a problem it needs to address and fix in terms of the system as a whole: Google’s giant video platform’s hubris is based on its belief that creators will never leave, regardless of how mistreated they are.