"The Biden team was not satisfied with Twitter's enforcement approach as they wanted Twitter to do more and to de-platform several accounts."
Share 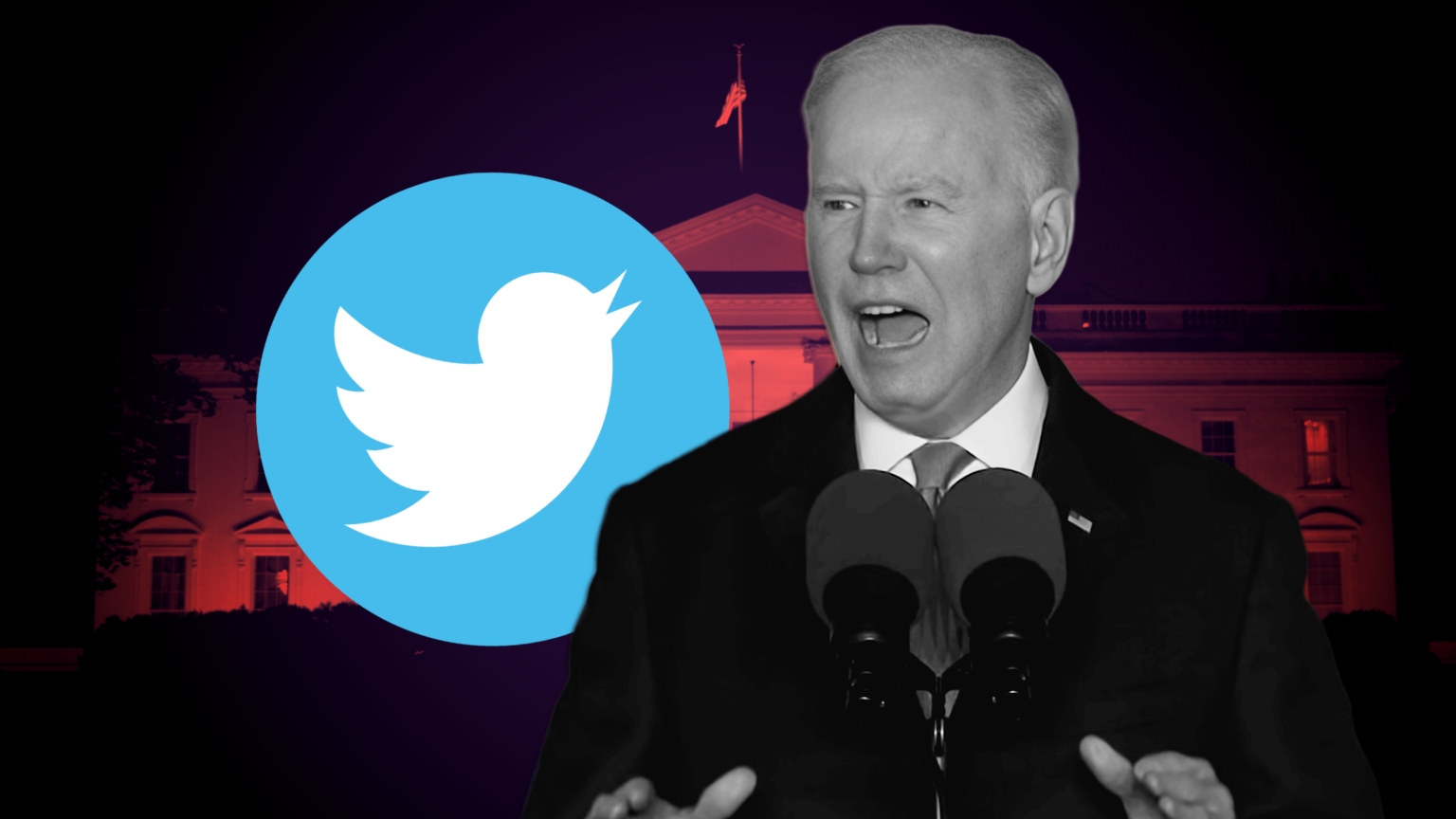 After President Joe Biden was inaugurated as President, Twitter banned many critics of the federal government’s Covid policy. It also suspended thousands of accounts for spreading what it called “COVID-19 misinformation.”

But according to a recently released “Twitter Files,” which was published by journalist David Zweig, the Biden admin wasn’t satisfied with this level of censorship and was “very angry” that Twitter wouldn’t censor even more aggressively.

One internal Twitter document showcases how the Biden admin started pressuring Twitter to censor so-called “COVID misinformation” almost immediately after taking the reigns at the White House. The document describes how the Biden White House’s first meeting request was about “COVID misinformation” and claims that during this meeting, “Biden’s staff focused on vaccines and high-profile anti-vaxxer accounts, including Alex Berenson.” 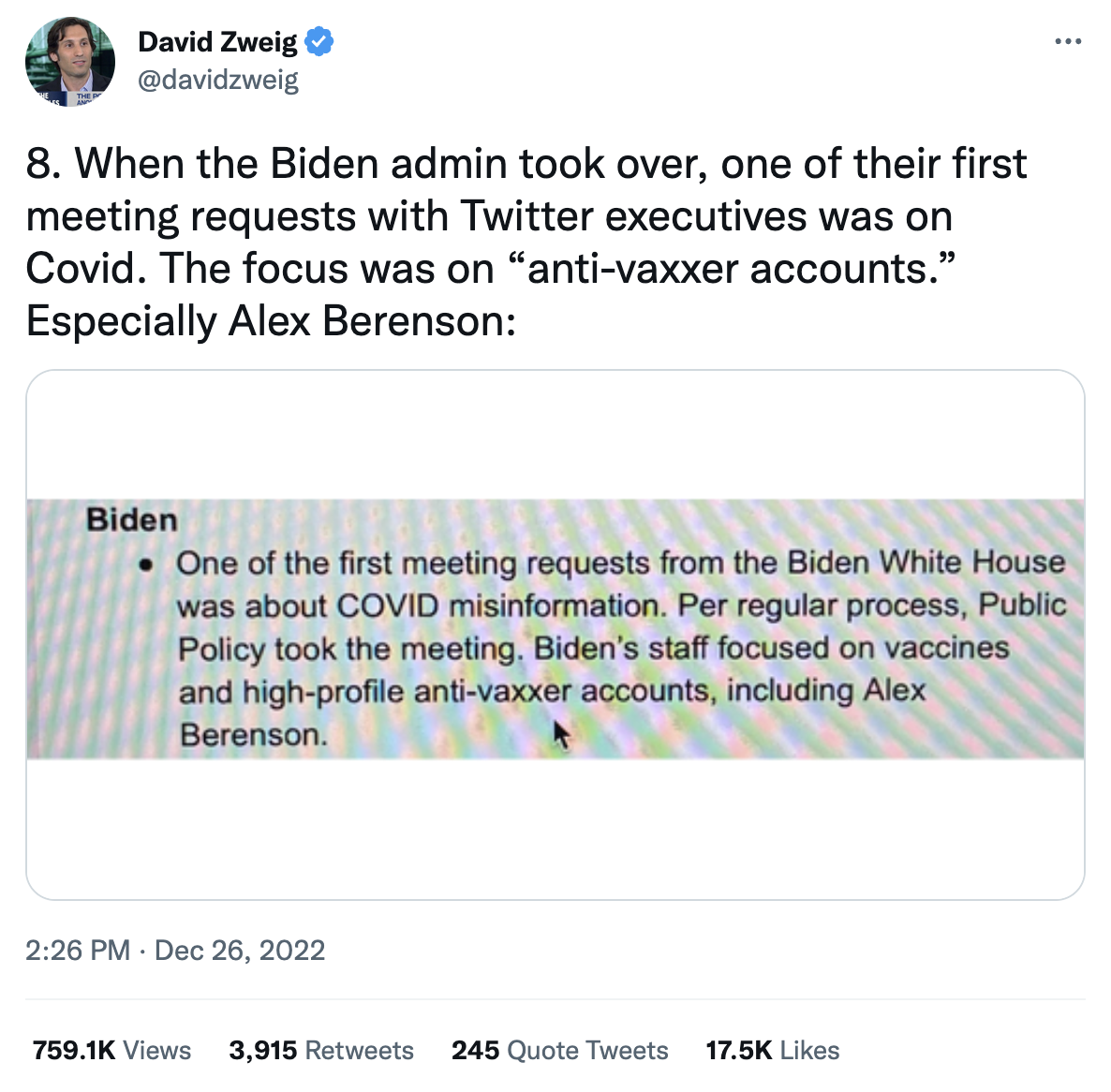 Another internal document written by Twitter’s Head of US Public Policy, Lauren Culbertson, summarizes a December 2022 meeting with the Biden White House and describes the Biden team’s anger at Twitter because it wasn’t censoring enough.

“The Biden team was not satisfied with Twitter’s enforcement approach as they wanted Twitter to do more and to de-platform several accounts,” Culbertson wrote. “Because of this dissatisfaction, we were asked to join several other calls. They were very angry in nature.” 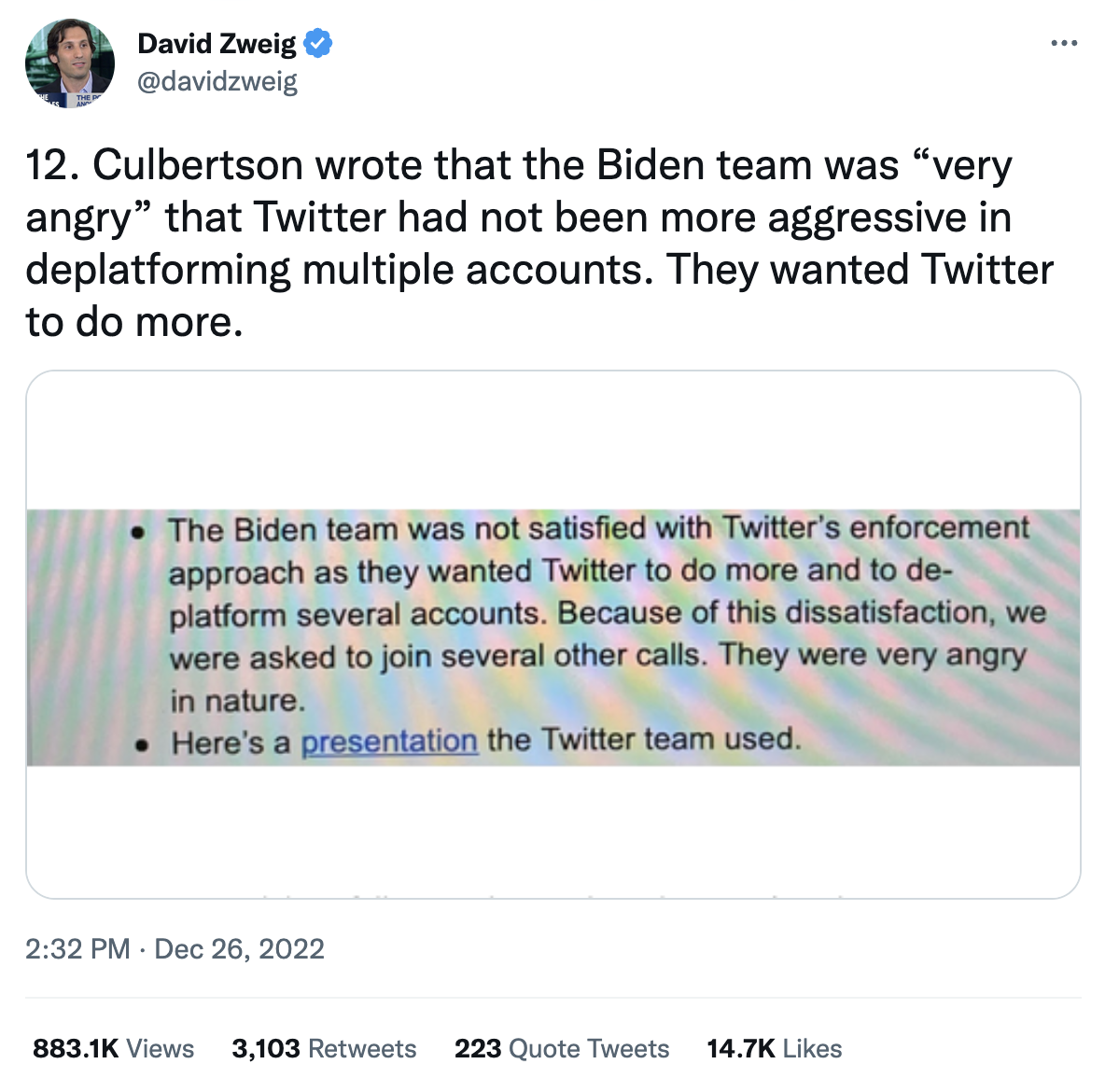 Zweig noted that his review of Twitter’s internal communications showed that Twitter executives “did not fully capitulate to the Biden team’s wishes” and often debated moderation decisions “with more care than was shown by the government toward free speech.”

Despite standing up to some of Biden’s demands, Twitter did still engage in unprecedented levels of censorship after the Biden admin came to power.

Zweig claimed that his review of internal Twitter files showed “countless instances of tweets labeled as ‘misleading’ or taken down entirely, sometimes triggering account suspensions, simply because they veered from CDC guidance or differed from establishment views.”

Some of the internal Twitter emails released by Zweig show Twitter flagging a tweet from Dr. Martin Kulldorff for censorship in March 2021 because he was “sharing false information regarding the efficacy of the COVID-19 vaccines, which goes against CDC guidelines,” despite Twitter’s “COVID-19 misleading information policy” not containing any prohibitions on going against CDC guidelines. 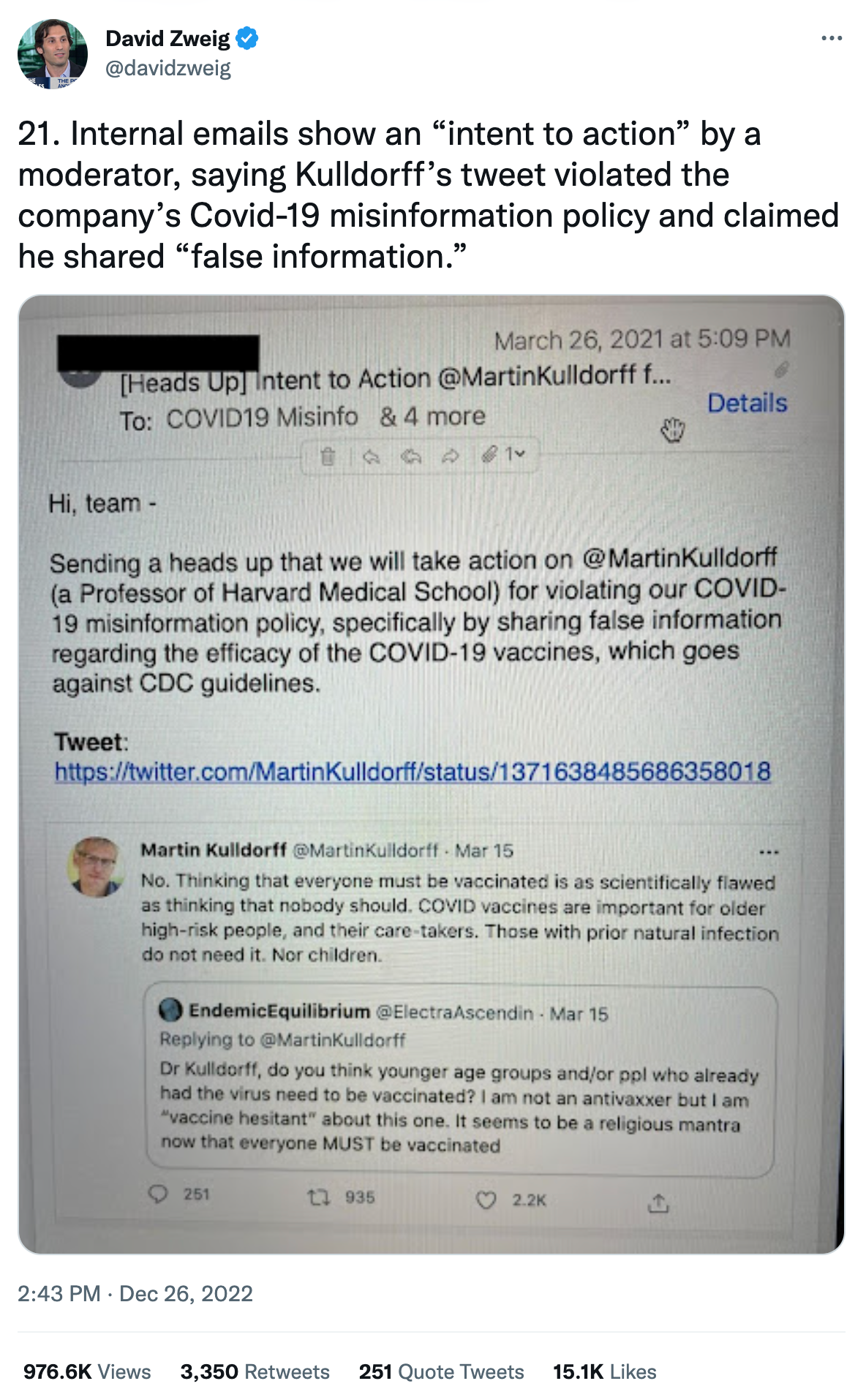 Kulldorff was a member of a “Vaccine Safety Technical” subgroup that advised the CDC and helped to develop a “Vaccine Safety Datalink” project that’s used by the CDC. He’s also a highly credentialed expert on infectious diseases. But his tweet was still censored. 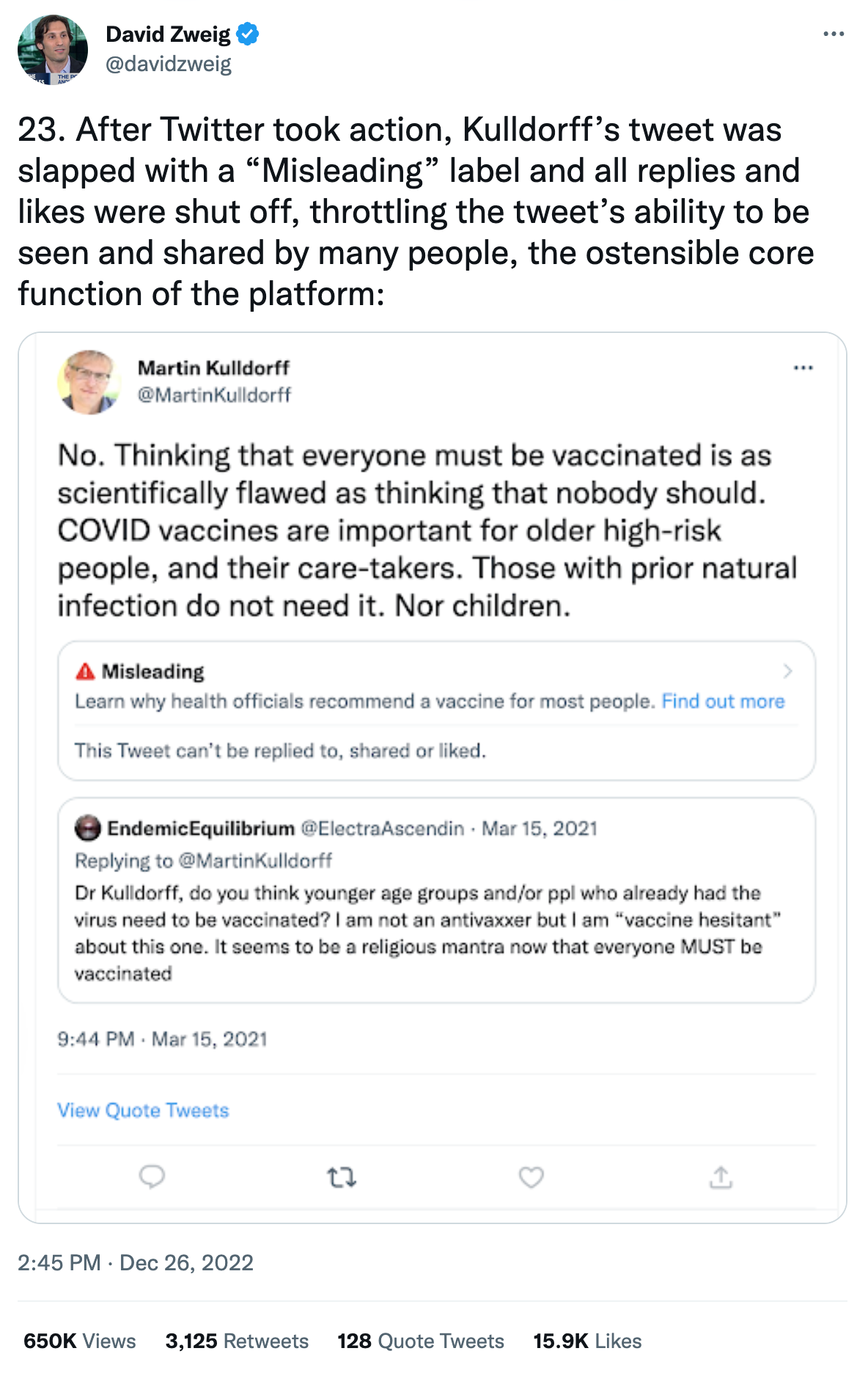 Zweig said that other internal records show a tweet from the self-described “public health fact checker,” Kelley K, being flagged by a bot for manual review in August 2022. Kelley K’s tweet was responding to a tweet containing a false claim about Covid being “the leading cause of death from disease in children” since December 2021 and used the CDC data to refute this false claim. But when the human reviewer looked at Kelley K’s tweet, they labeled it as “misleading” and didn’t take any action on the tweet containing the false claim. 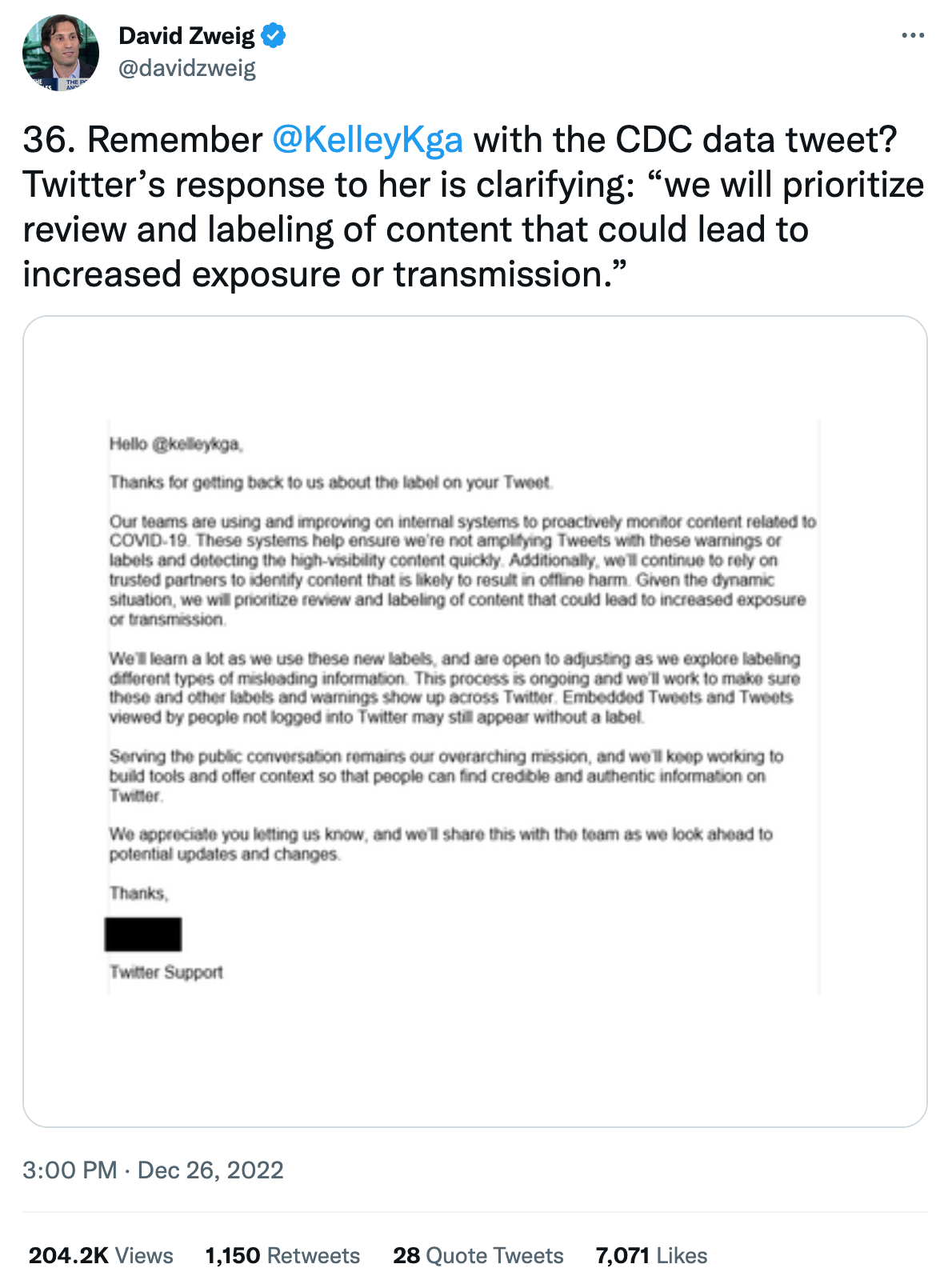 According to Zweig, this highlighted how Twitter had “made a decision, via the political leanings of senior staff, and govt pressure, that the public health authorities’ approach to the pandemic – prioritizing mitigation over other concerns – was ‘The Science.'”

Zweig also provided internal Twitter files related to the suspension of Dr. Andrew Bostom who was banned from Twitter in June after receiving five strikes for “misinformation.” 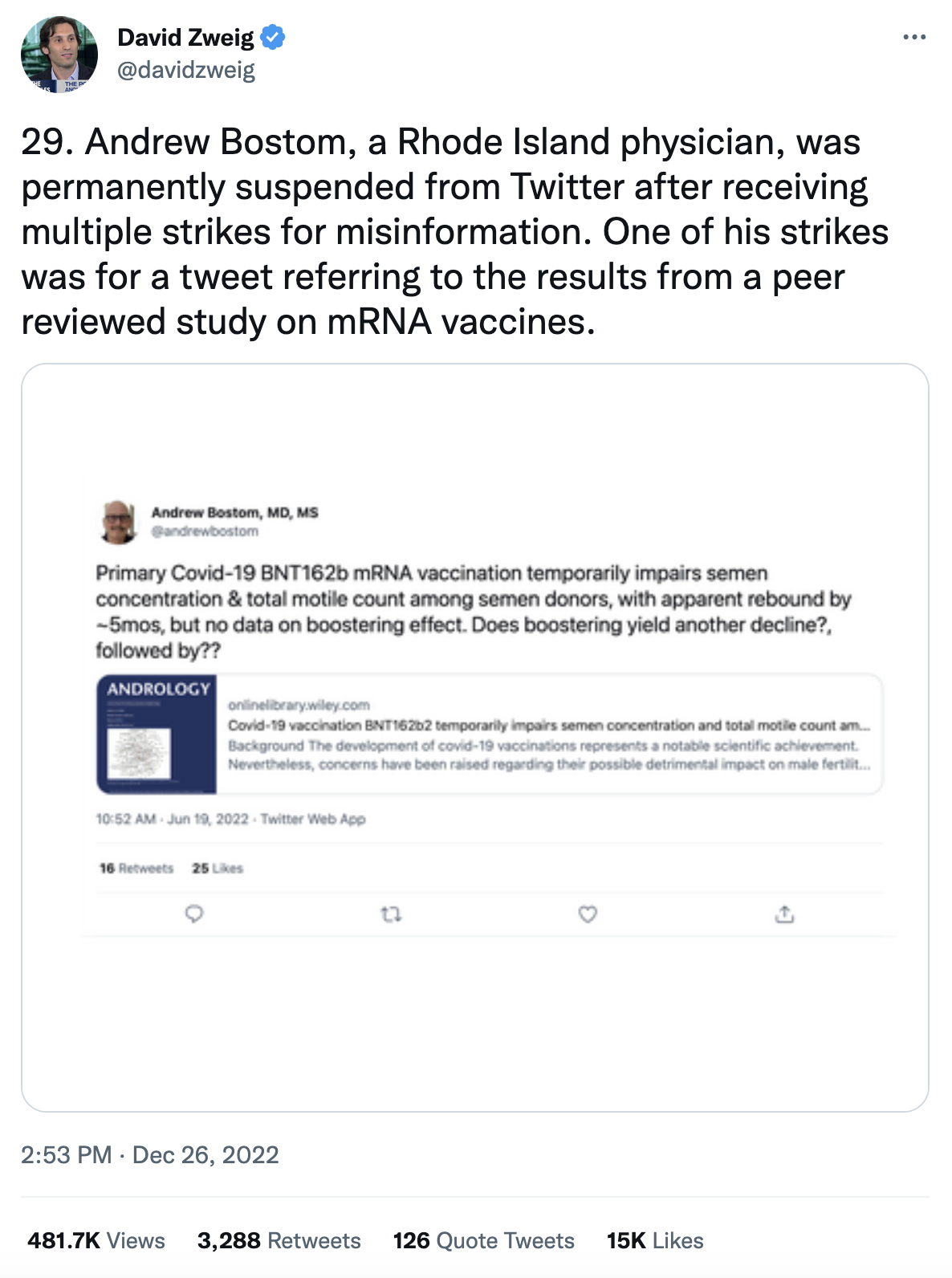 These files show Twitter admitting that it had applied four “invalid” strikes to Bostom’s account that are “not in violation” of the rules after Bostom’s attorney contacted the platform. However, Zweig said that even the “tweet found to still be in violation cited data that was legitimate but inconvenient to the public health establishment’s narrative about the risks of flu versus Covid in children.” 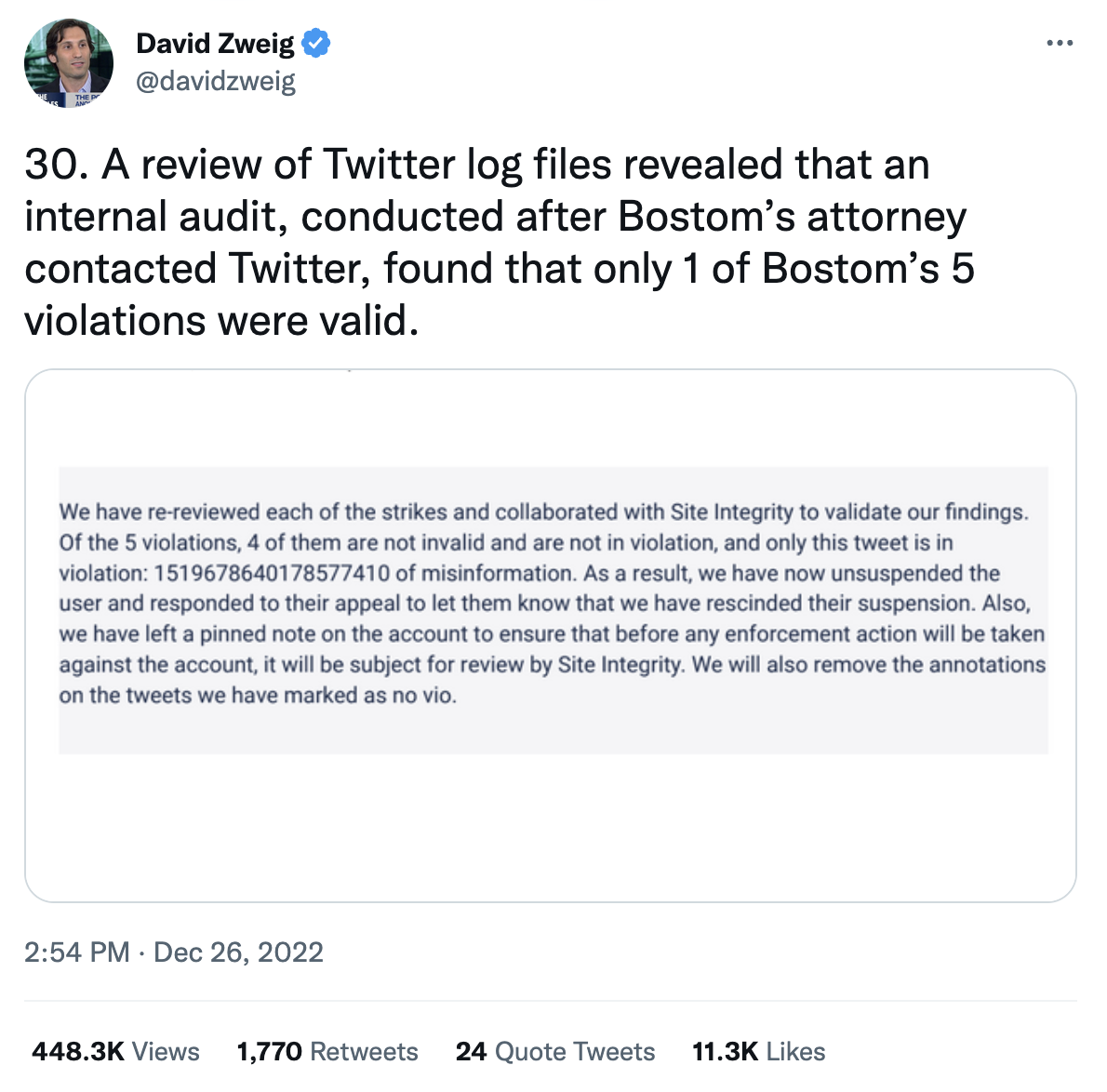 Bostom was eventually reinstated on December 25.

According to Zweig, Twitter’s censorship of doctors and other scientific experts who shared content that conflicted with the official positions of the White House was due to major problems with Twitter’s content moderation process.

However, Zweig said that the most significant of these problems was that high-level Twitter employees chose the inputs for the bots and the decision trees which were used by contractors and “subjectively decided escalated cases and suspensions.” This, according to Zweig, led to “individual and collective bias” and “with Covid, this bias bent heavily toward establishment dogmas.”

Zweig added: “Inevitably, dissident yet legitimate content was labeled as misinformation, and the accounts of doctors and others were suspended both for tweeting opinions and demonstrably true information.”

“I was not only blacklisted and temporarily suspended by Twitter,” Kulldorff tweeted. “When I gave accurate #CovidVaccines information, some Twitter dude label[ed] it misleading and suppressed it by preven[ing] comments and likes.”

“So @Twitter internally concluded my client @andrewbostom committed only *one* violation of the COVID-19 speech code, but locked his account anyway,” Lawrence III tweeted. “This is the definition of ‘bad faith’ moderation. You couldn’t run a lemonade stand like this without facing endless litigation.”

Bostom added: “Thanks to @davidzweig for exposing the grotesque injustice of @Twitter’s suspension of many accounts, including my own, due to alleged covid ‘misinformation’ i.e., evidence-based data rebutting the warped, but ‘accepted’ narrative.”