They changed their tune as soon as the vote was passed.
Share 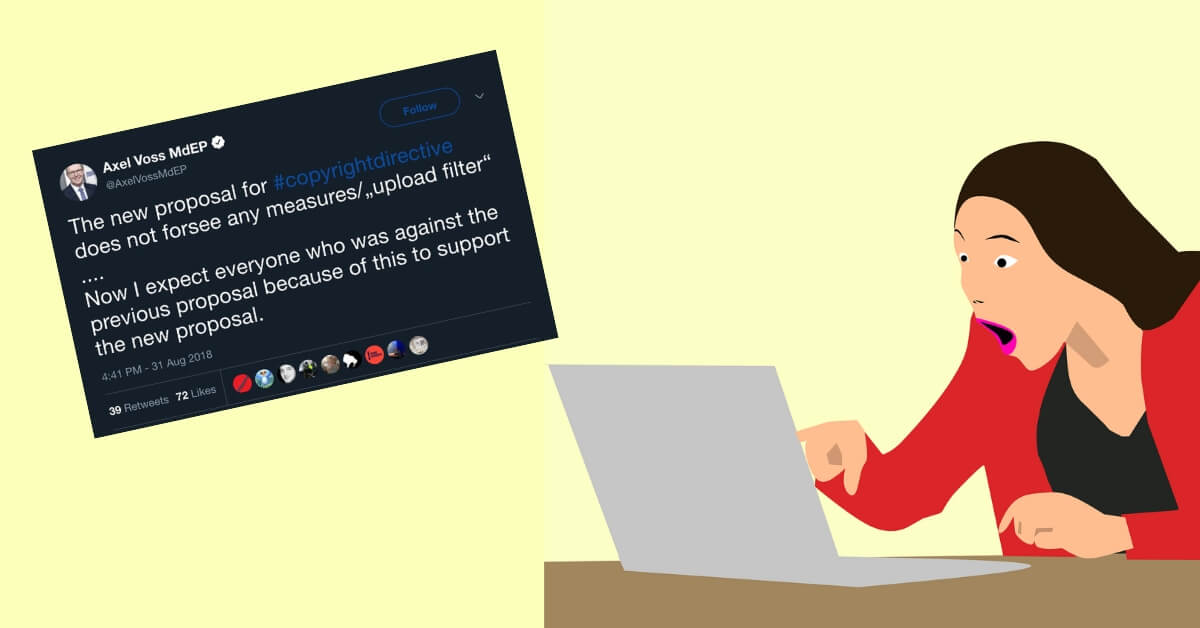 Would Members of European Parliament (MEPs) lie to you? Would they say something that wasn’t true?

And would this paraphrase of an ’80s Eurythmics hit constitute unfair use of copyrighted material under EU’s newly adopted – but as of yet unenforced – legislation?

Who’s to say, when it comes to that second point – but the answer to the first question at least is undeniably “yes.”

That is the gist of the wake of the passing of the highly controversial (for reasons both essential, and procedural) earlier this week in the European Parliament (EP) of the “Copyright in the Digital Single Market Directive” bill.

German MEP Axel Voss from the ruling German CDU party – one in charge of the Directive – in August last year posted this tweet, which reads, verbatim:

“The new proposal for #copyrightdirective does not forsee any measures/’upload filter’…. Now I expect everyone who was against the previous proposal because of this to support the new proposal.”

The EP is the legislative body of the European Union (EU) whose executive branch – representing the 28 EU members out of Europe’s total of 50 sovereign states – is known as the European Council (EC).

Now the EC must confirm the decision made by the EP – which would in that case be sent to each individual EU member-state to implement. The deadline is 2021.

And while the legislation does not directly call for content filters, observers said websites would not be able to avoid them if they wished to comply and avoid penalties.

Meanwhile, it turns out that not only Axel Voss may have lied, but that Article 17 (originally Article 13) – putting pressure on websites to police user uploads, something hotly contested and protested in Europe ahead of the adoption of the directive – does indeed require filters – filters that in any case “wouldn’t work and would ban legitimate speech,” Techdirt said.

Only a day after the EP voted in favor of the proposal, the French culture minister, Franck Riester, “admitted to the law requiring filters” and to his hopes that France would implement the legislation as quickly as possible with the consequence of “starting to lock down the internet,” the website said, quoting him as urging introduction of “content recognition technologies.”

This suggested France’s readiness to pioneer the highly controversial move to adopt the legislation and install automated content filters well before any enacted EU law required the country to do so.