Before Luzbelheim started his speedrun of Final Fantasy VIII at AGDQ, Twitter users dug through his Twitter profile and complained about his bio, which says “I hate feminazism,” and a tweet that supported the economic policy of right-wing political party VOX. VOX is a Spanish political party and Spain’s third most popular party in terms of vote share.

Luzbelheim has clarified that he’s using the term to describe “pseudofeminists” and that he doesn’t hate feminism. He added that the people criticizing his tweets know “nothing about Spain politics.”

Okay.
You hate the term because some people use it to refer normal feminism.
I tell you that I don't hate feminism and the term is used to call the pseudofeminists I mentioned tweets ago.
In a normal situation the debate would end there.

Regardless, once the Twitter thread started to gain some traction, The Gamer and The Daily Dot published articles amping up the pressure on GDQ by claiming that Luzbelheim is “a far-right ultra-nationalist” and a streamer with “bigoted views.” The Daily Dot even contacted GDQ directly and said in its article that “it’s baffling that the vetting process it has in place allowed Luzbelheim to make it to stream.”

Luzbelheim responded to the articles saying that they were lying and being willfully ignorant but shortly after they were published, Luzbelheim was given an 18-month ban from AGDQ.

This is the same people that plead for inclusivity, tolerance and freedom.
Also mocking about my pronouns because instead of they/their I decided to use my name as neutral.
Amazing how messed up is the social media and how people follpw the trend like sheeps without researching.

The article is hilarious to be honest, and only proves what I've been defending for a long time.
Willing ignorance is a terrible weapon if you use it in a totalitarian way. 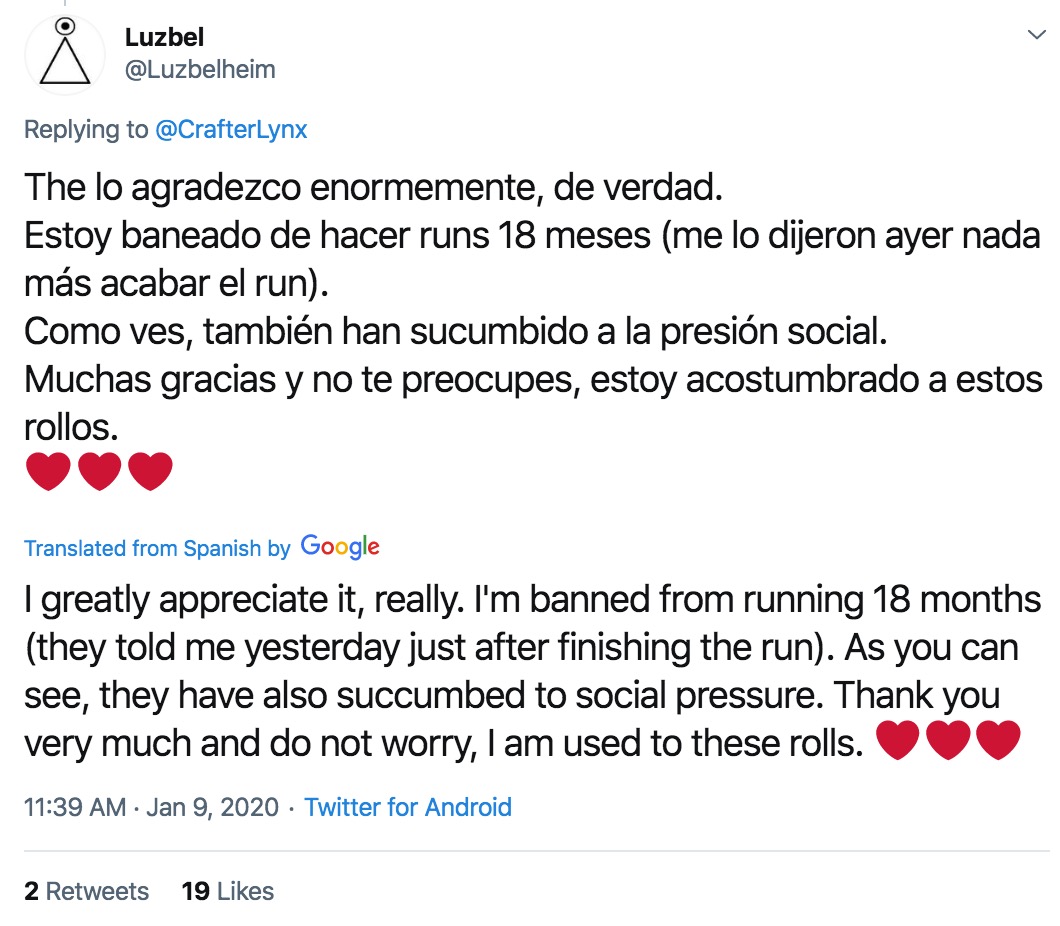 People have rallied behind Luzbelheim in the wake of the ban.

“GDQ bans just seem like reactions to callout posts rather than well thought out decisions based on a consistent set of criteria,” said one user.

Another user described the ban as “stupid” but “not really surprising.”

My opinion (that nobody cares about) on @Luzbelheim 's ban of GDQ. It's stupid, but it's not really surprising. Luz has his political opinions, and he didn't express them on stream (afaik). Therefore, he shouldn't be banned on them.

Others responded to the ban with a sense of sarcasm: “This just in: GDQ should start screening all runners by making them declare their political party. Any registered republicans are hereby banned from the event because this is now a political event, not a charity speedrunning marathon.”

This just in: GDQ should start screening all runners by making them declare their political party. Any registered republicans are hereby banned from the event because this is now a political event, not a charity speedrunning marathon.

While GDQ hasn’t publicly commented on the ban, the timing suggests that it’s another example of a creator getting canceled in response to online complaints.

Public figures are increasingly speaking out about the dangers of cancel culture. YouTuber and podcaster True Geordie said he had suicidal thoughts when an online mob tried to end his career. Democratic presidential candidate Tulsi Gabbard also said that cancel culture creates a “culture of fear.”

Despite these warnings about the impact of cancel culture, many still actively embrace and encourage the idea that people should be canceled for having different ideas of opposing opinions.