Trump campaign lawyer Jesse Binnall appeared before the US Senate Homeland Security Committee to testify about the security and integrity of the presidential election on December 16, but YouTube users wouldn’t know exactly what he said, as his opening statement has been deleted.

The Trump campaign, which alleges wide-scale election fraud took place on November 4 and seeks to prove this in a series of legal battles, often claims that it is being hampered every step of the way on some of the biggest and most influential social media.

Binnall explained what they believe this might be the reason: Google (via its video giant) is “afraid of the truth.” 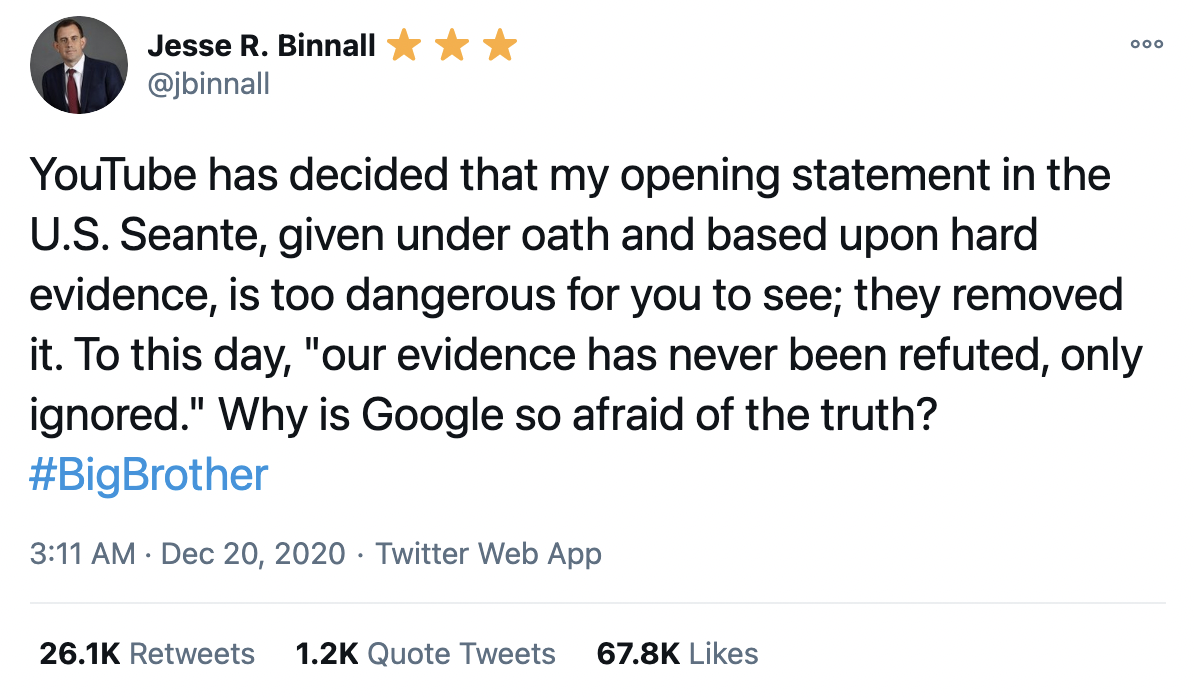 And the truth, according to the attorney, is that although he testified under oath and presented hard evidence, that evidence coming from the Trump camp “has never been refuted, only ignored.”

One sure way to ignore it, and make the YouTube audience do the same, is to remove content, which Binnall says happened to his opening statement here. More damningly, he suggests Google is now deciding what is “safe” for users to even see, let alone be exposed to information and form their own opinion.

This “gatekeeping” is nothing new for YouTube, of course, but it has really picked up pace and become more obvious this past year. One of those issues that demanded extra censorial diligence from YouTube has been the US election, particularly information challenging the narrative about its outcome that was formed early on, and cemented thanks to corporate media, and giant social platforms’ efforts.

In YouTube’s own words, published in early December, it would be removing content that questions legality and legitimacy of the election through widespread fraud (in other words, content claiming minor and inconsequential errors is allowed). For some reason, in the same statement, YouTube declares this past election as “historic,” perhaps to give it an aura of unquestionable truth.

YouTube’s announcement, however, was questionable in itself, promising to “ramp up” the policy in the weeks to come (coinciding with Trump’s legal team’s effort to prove their election fraud claim during December.)

Binnall’s statement can still be seen on C-Span.