Crowdsourced lists to "out" people online are an increasing mob-like tactic.
Share

Some might call it a witch hunt, and sometimes it turns into a manhunt – these are online campaigns, often inspired by the prevailing mood of the moment, set by mainstream media.

But it is on social media where these can spread and cause real harm. And the question of what, if any liability of social and tech platforms who allow it, is being raised once again – not least importantly in light of CDA’s Section 230.

These are some of the key issues emerging from a lawsuit filed by Stephen Elliott, an author accused of rape in the “Shitty Media Men” Google spreadsheet created by Moira Donegan at the height of the “MeToo” movement. It’s a media and entertainment industry blacklist compiled by anonymous contributors.

Elliott decided to sue Donegan for libel, and now a New York federal judge has ruled against a motion to dismiss that lawsuit.

Read the judge’s decision to allow the case to continue here.

The decision is based on the judge deciding that Elliott, though a published author, is not actually a public figure falling under the US “malice to prevail” or “actual malice” legal rule, requiring officials and public figures looking to sue for libel to prove ill intent before proceeding with a case.

And as this particular case continues in its full procedural glory, the next stop could take us into the exploration of the reaches of CDA 230 – the implication being that Donegan isn’t guilty of libel as she just created the crowd-sourced document that others filled out.

“The CDA’s barrier to suit is not evident from the face of the complaint, and Defendant’s motion to dismiss on the grounds that she is protected by CDA immunity is dismissed,” the judge ruled.

In the meantime, creating blacklists is a practice that is alive and well on the internet, as this tweet shows:

“Gonna put together an official post soon – but if you work in PR/dev and have any business association with the people being named as perpetrators of sexual/emotional harassment – Noclip will be blacklisting you & aggressively, publicly encouraging others to do the same,” user @dannyodwyer, an Irishman behind Noclip – that is “creating video game documentaries” – recently said on Twitter.

Perhaps oblivious to the fact they might be facing lawsuits at some point in the future, others are doing this, too, to “out” alleged racists. Many of which are minors.

Inspired by the current societal unrest in the US, one now 22-year-old decided to get back at former classmates in a high school near Chicago, who the report says “tended to bully or dismiss their peers who were people of color.”

It’s a Google Doc, started by Karina Carbajal and promoted by Twitter users and a YouTube influencer, currently naming and shaming Minooka Community High School students by listing their names and details on 23 pages. 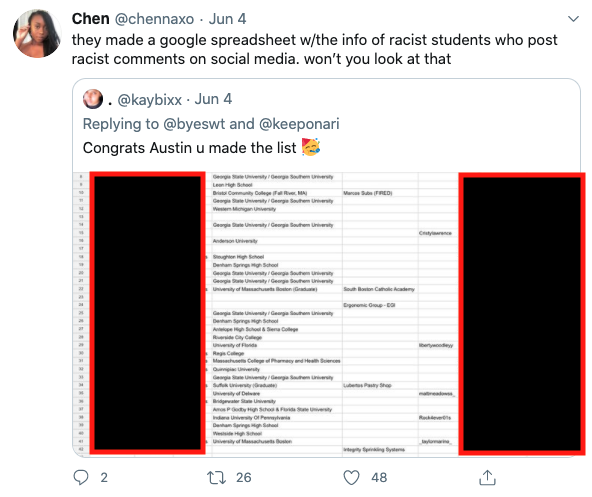 “Some people say, ‘You’re ruining their lives.’ I think it’s the only way to prove to them that actions do have consequences,” said Carbajal.