Video streaming and production powerhouse Netflix has gotten entangled in problems on multiple fronts as it defends its choice to release the controversial French movie “Mignonnes” (“Cuties”) in the US.

On one hand, Netflix is under fire for the film itself, that those critical of making it available on the platform say sexualizes children, while on the other, the giant appears to be engaging in more shady behavior by issuing false copyright takedowns over on YouTube.

Twitter user @SidAlpha shared the news about one of his videos, a critique of “Cuties” – that he referred to as “the giant Netflix bait movie” – getting blocked and demonetized on the Google-owned platform, at the behest of Netflix. 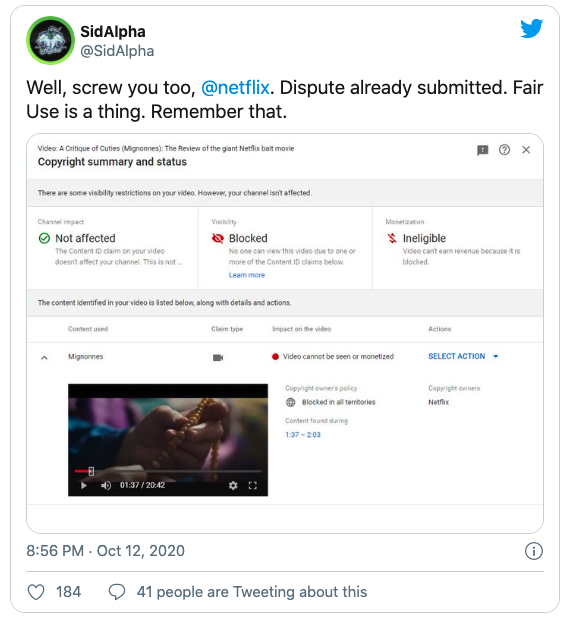 This gaming commentator, however, announced he would be disputing the copyright claim on the grounds that whatever use he made of Netflix-copyrighted material fell under the fair use rule. If they meet conditions of this exception, creators are allowed to use copyrighted content without first obtaining the rights holder’s permission.

However, it’s not in the least unusual for large entertainment, gaming and music industry corporations to abuse the online copyright system, implemented by YouTube and others often as automated processes that block videos first and allows counternotices to be filed later. The purpose of false copyright strikes, meanwhile, is to silence critics, or independent creators they see as rivals.

Here, Netflix seems to be particularly sensitive to anything surrounding the release of the film, and looks willing to fight dirty, all the way to pulling the copyright card to remove critical videos.

This comes as Netflix co-CEO and chief content officer Ted Sarandos went as far as to mention First Amendment free speech protections to justify his company’s decision to show the French film, which he described as “very misunderstood.”

The movie focuses on an 11-year-old girl whose way of escaping traditionalist constraints of her African-Muslim family is – to join a “twerking troupe” whose repertoire revolves around performing “simulated sexual dance routines.”

Clearly not something everybody wants on their screens – and that includes members of US Congress, Republicans and Democrats, some of whom weren’t mincing their words when they branded the film as “child pornography.”

It’s easy to see why Netflix would want to suppress any criticism as it faces potential legal challenges over the movie.