The DMCA is increasingly being used to censor.
Share

Another day, more proof that the US copyright law passed in 1998 known as the Digital Millennium Copyright Act (DMCA) is being used as a tool to censor speech, prevent criticism, undermine competition, and a variety of other “unintended” purposes.

This time it was a Miami University student who had critical thoughts about Proctorio, a company making proctoring software, and expressed those thoughts on Twitter.

The shortcomings of DMCA allow individuals and companies to abuse it by sending fake copyright takedown notices to which social media giants respond by quickly complying to protect themselves, meanwhile leaving users out to dry.

And so Proctorio decided to silence the student, Erik Johnson, by hitting his tweets with a DMCA copyright takedown, which Twitter obeyed, removing three posts.

What Johnson did is what digital rights activists call a classic example of fair use – rather than any kind of copyright violation. He downloaded and examined a Chrome browser extension that the company mandates students must install in order to take a test, and his tweets revealed what he found out in the code, which he also posted on Pastebin.

Some of the things Proctorio’s extension does is end the exam if a student is suspected of cheating for reasons like switching networks, “abnormal clicking,” and even eye movements.

The censorship came six weeks after Johnson took his findings, and a link to Pastebin, to Twitter in September, in a thread critical of the way Proctorio’s product works, say reports. 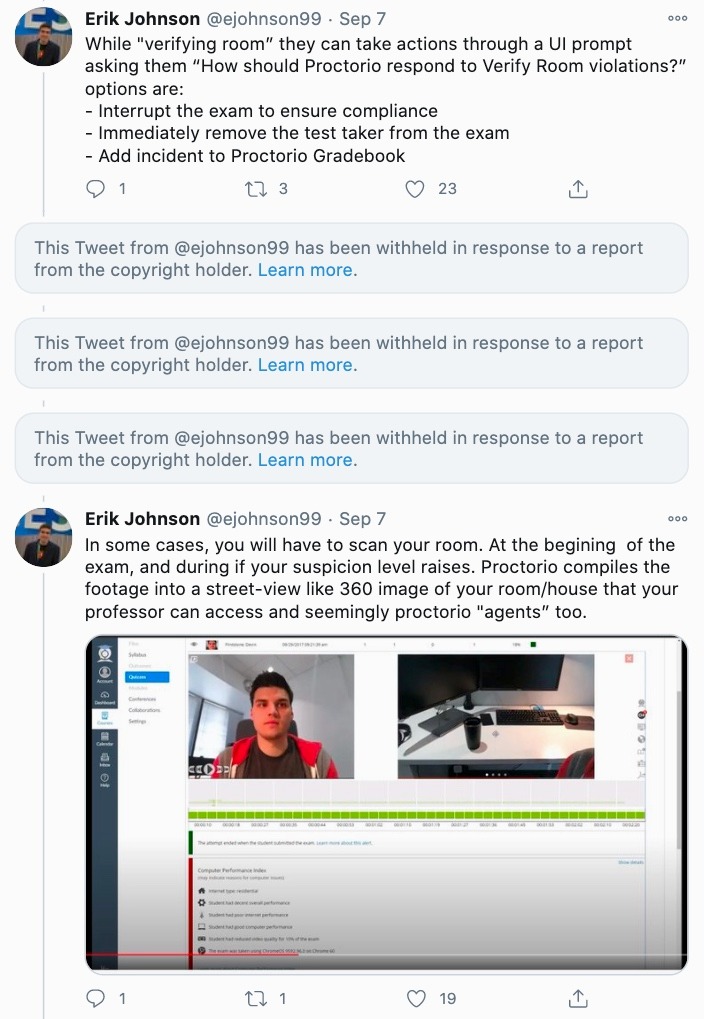 With education being one of the major parts of life extremely disrupted by coronavirus lockdowns and other restrictive measures, companies that provide proctoring – making sure that those taking exams don’t cheat – have seen their business boom thanks to so many students being forced to attend classes and take exams remotely.

But although schools are becoming reliant on this type of software, students are consistently complaining and even protesting that it is not up to the standard it should be, especially when it comes to their privacy and data security, given the product’s invasive nature.