It’s almost taken for granted now, if you follow the narrative presented by mainstream media and a portion of the country’s political and activist landscape – the police are racist. And that’s that. No nuance.

Racism itself, like many other -isms, means uncritically assigning negative attributes to an entire population/nation/race, and then generalizing based on that.

So logic dictates that fighting racism by painting an entire profession with a broad negative brush-stroke would be a problem – but as reports now suggest, those who seem intent on adding nuance and thought, not to mention research to this issue are the ones found to be behaving controversially.

That’s at least the gist of the case of Michigan State University (MSU) VP of Research and Innovation Stephen Hsu, who has been “canceled” from this position by his university for alleged racism.

Hsu, a physicist, talked about this in an interview (see his blog here) explaining that the accusation came because of his study delving into the issue of race bias linked to police shootings. It was his decision to interview Joe Cesario, an MSU professor and psychologist, that got the institution’s Graduate Employees Union (GEU) to gang up on him as “unsuitable” for his role at the college.

Cesario in 2019 conducted a study that found there was no widespread racial bias in incidents that involved the police using firearms against suspects – and, perhaps crucially here, the study dismissed activists and media as, essentially, not knowing what they were talking about.

“Contrary to activist claims and media reports, there is no widespread racial bias in police shootings,” Cesario wrote.

Hsu’s fate was sealed on June 10, when MSU’s Graduate Employees Union took to Twitter and going as far as calling Hsu “a vocal scientific racist and eugenicist,” and demanding he be removed. 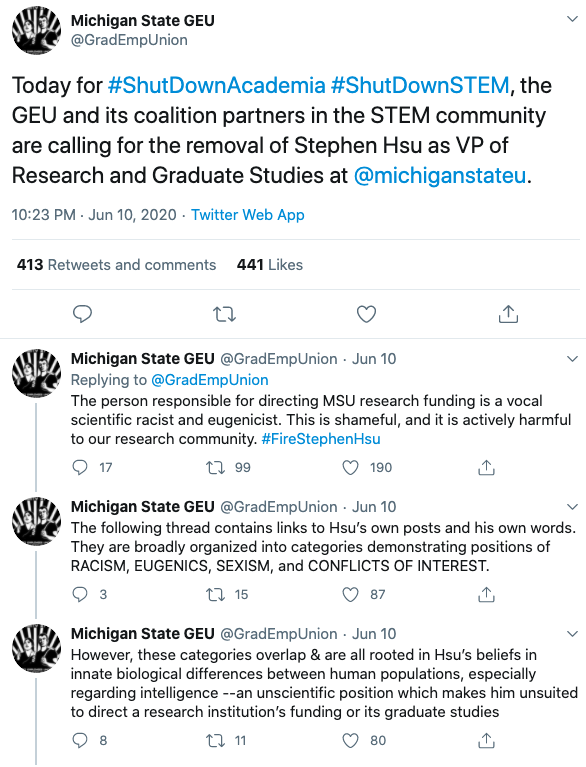 A usual tactic of those looking to incite action and wield power, conveniently, MSU’s Graduate Employees Union’s tweet decided to ignore the context. 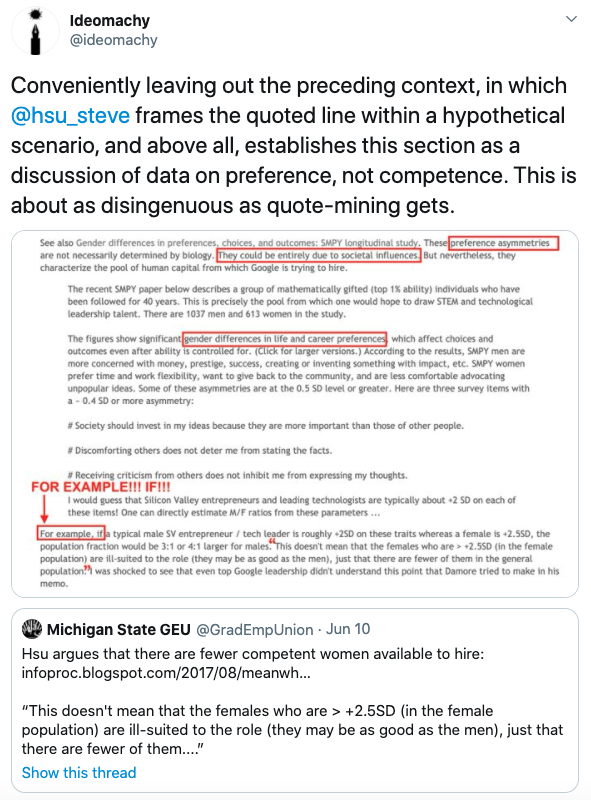 GEU Vice President Acacia Ackles now says that Hsu’s work was an example of discordance with the university’s values, and meant that he was no longer fit to deal with issues like coordinating undergraduate studies and recruiting scholars.

Moreover, Ackles spelled it out: opposition is not allowed. “It is the union’s position that an administrator sharing such views is in opposition to MSU’s statements released supporting the protests and their root cause and aim,” she wrote in an open letter.

But that was not all, as Hsu soon faced the usual attacks on Twitter accusing him of serious transgressions such as sexism, racism, and support for eugenics – all of which he denies. His resignation soon followed. 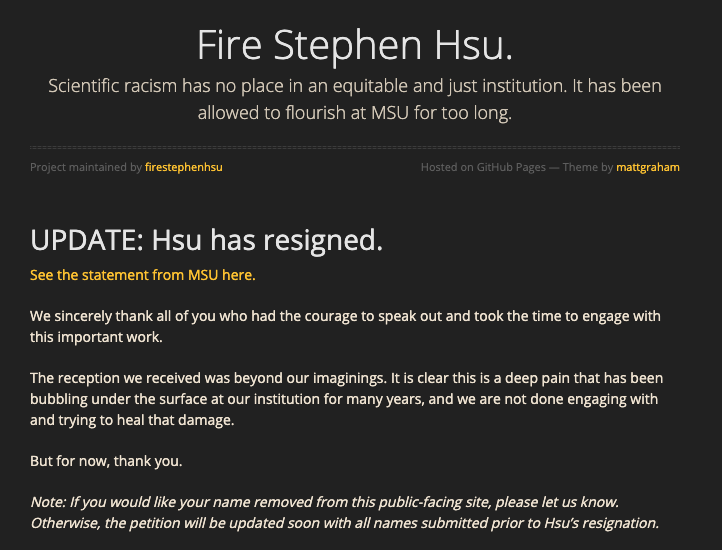 And while 800 people supported a petition to fire him, more than 2,000 backed him with their signatures, including top academics such as Harvard’s Steven Pinker, as well as MSU professors who said there is “zero concrete evidence that Hsu has performed his duties as VP in an unfair or biased manner.”

“Therefore, removing Hsu from his post as VP would be to capitulate to rumor and character assassination,” the petition said.