Updated: TalkRadio, one of the UK’s biggest radio stations, banned by YouTube 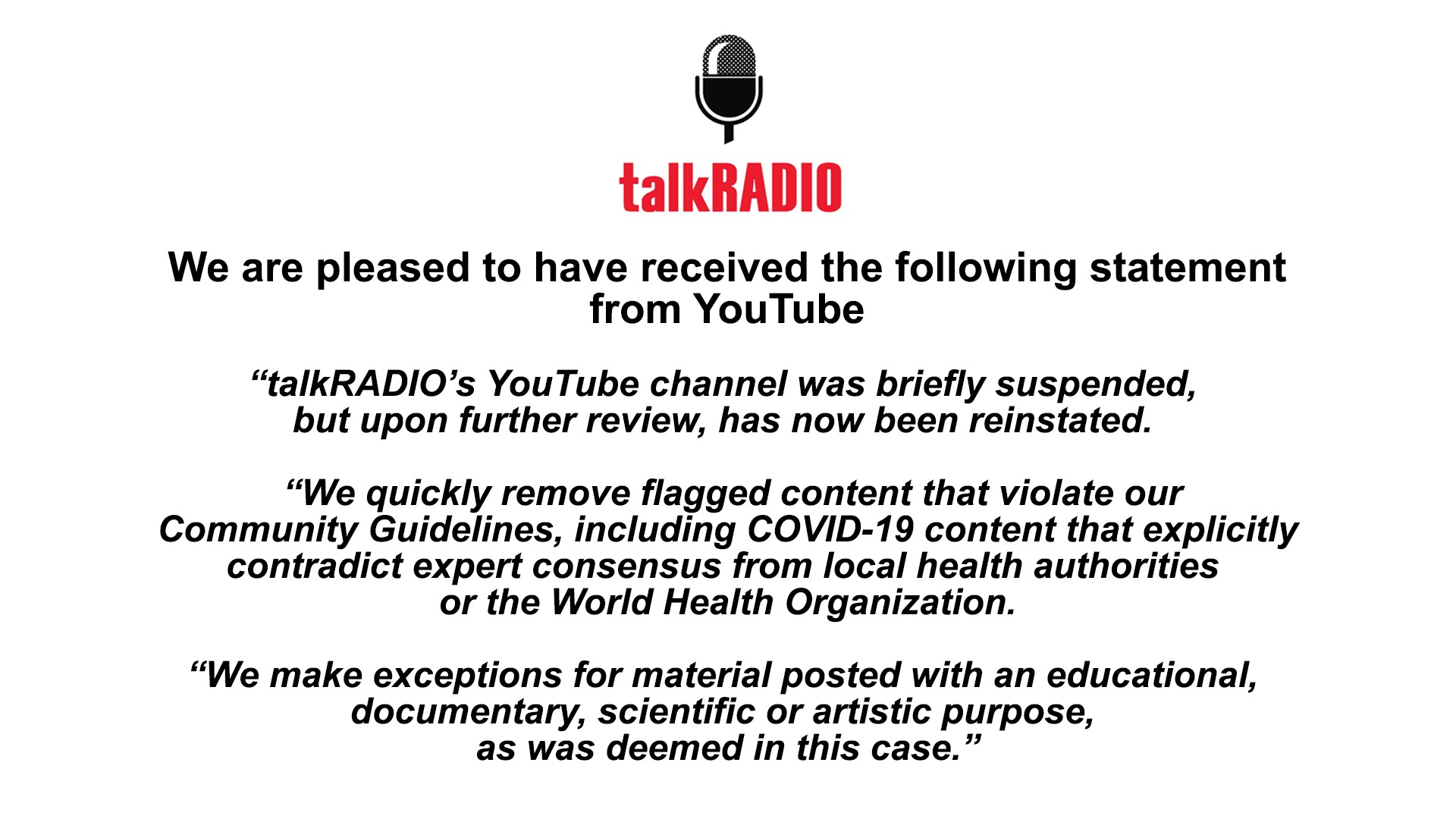 On Tuesday, UK-based talkRADIO announced that YouTube had removed its channel from the Google-owned platform. 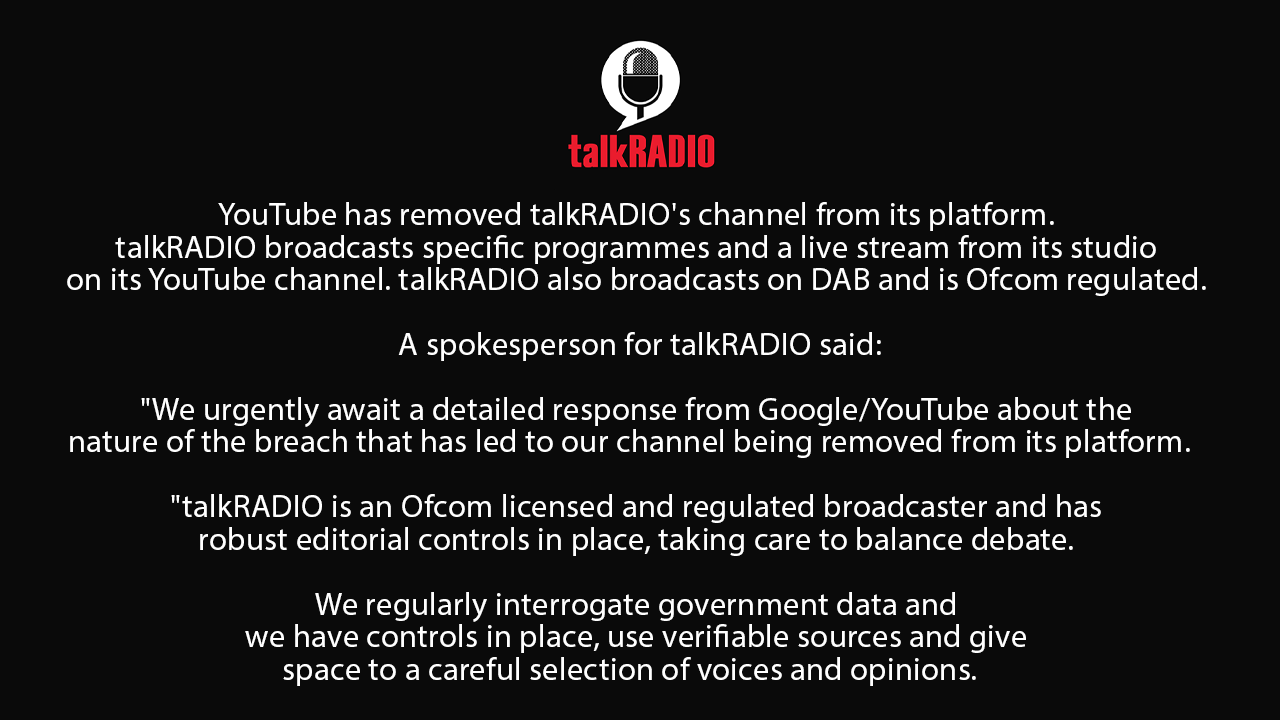 And while talkRADIO, owned by News UK, and its audience, including hundreds of thousands of Twitter followers await YouTube’s “detailed response” regarding this development, a quick look at the content its hosts and editors share and focus on reveals that the outlet is not afraid to allow anti-lockdown sentiment and skepticism to air.

Considering YouTube’s vigorous clampdown on any content that is seen to in any way challenge the official narrative around the Covid pandemic and measures such as lockdowns, this could be the reason the channel has been deleted. It’s also unclear from information shared so far by talkRADIO if the removal was sudden or if they had received prior warnings and “strikes” from YouTube. 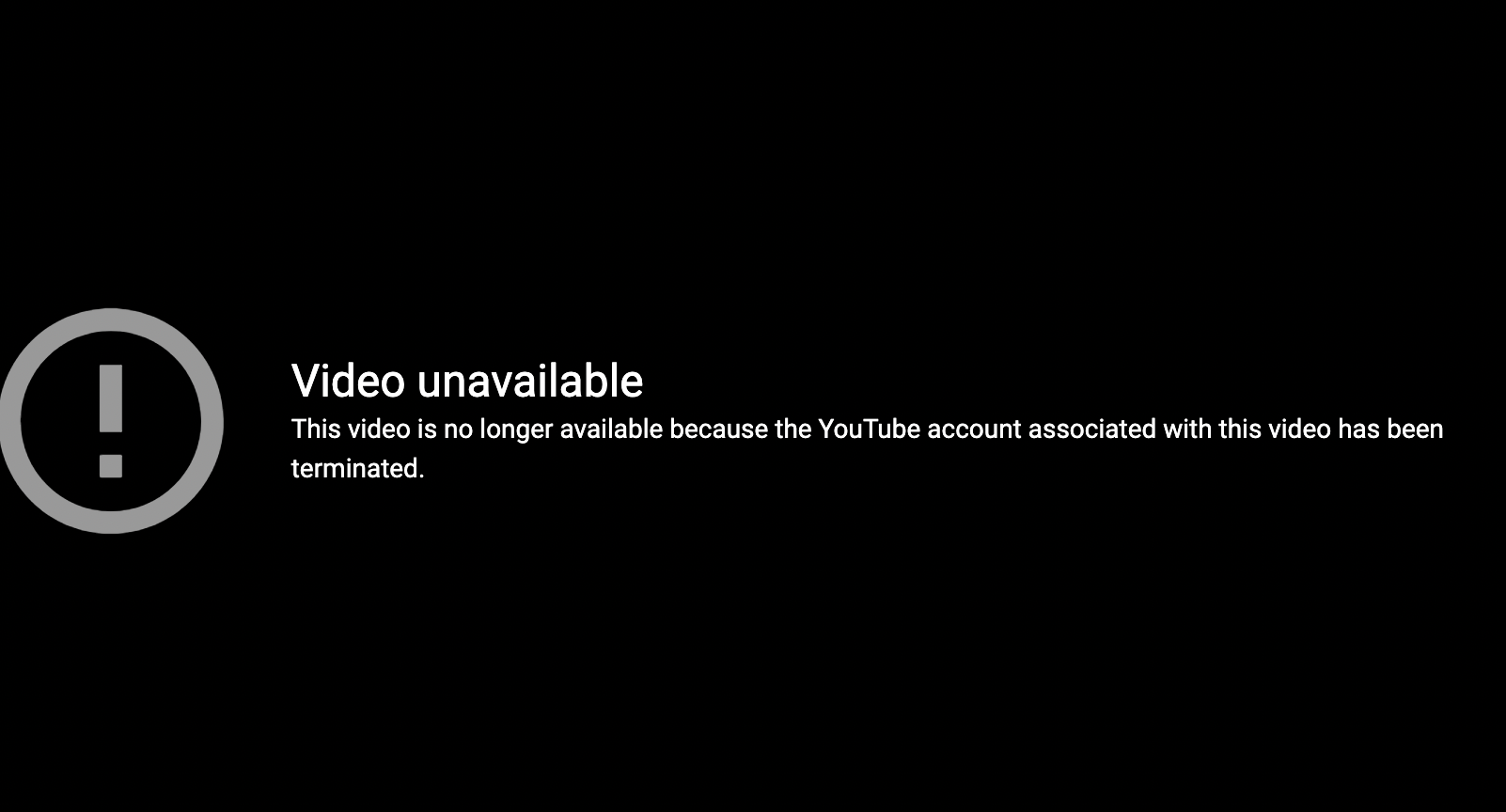 The move has sparked a freedom of speech backlash against Google led by senior minister Michael Gove.

In a statement issued in reaction to YouTube’s decision, a spokesperson said that the radio outlet was urgently awaiting an explanation from Google/YouTube on the reasons why the channel was deleted, and that they hoped for a detailed response that would reveal the nature of the violation of the giant’s rules.

This point makes sense given that YouTube customarily removes channels, blocks videos, or otherwise censors content while providing nothing more than brief and generic notes that don’t go into any specifics concerning the real or purported violations.

talkRADIO also noted that it is a broadcaster licensed and regulated by UK’s Ofcom. Furthermore, the statement said the station was mindful of providing strong editorial controls and a balanced debate.

“We regularly interrogate government data and we have controls in place, use verifiable sources and give space to a careful selection of voices and opinions,” concluded the spokesperson.

talkRADIO presenter Julia Hartley-Brewer said that YouTube’s rules had not been violated. “We simply challenge the evidence that lockdowns are a proportionate response to the Covid virus. It’s called free speech,” she said.

“I don’t believe in censorship,” Cabinet Office Minister Michael Gove told Hartley-Brewer on talkRADIO, adding that big tech companies should not censor those who question the government’s handling of the coronavirus pandemic: “It’s important their voices are heard.”

In the meantime, the station remains available to stream online and on DAB radio, and also live on Facebook and Twitter.

Early reports about YouTube’s decision refer to is as an extraordinary example of censorship that has quickly met with condemnation from free speech and free press activists.

So far, YouTube has not given any detailed explanation, while the warning on the videos say talkRADIO was deleted for a violation of community guidelines.