Social media users are campaigning to get him removed.
Share

It was only in mid-June that Quaker Foods North America announced its iconic Aunt Jemima brand was rooted in racial stereotyping and that it would “cancel” the name, and the image representing it – that of a black woman.

And it was only after social media users started calling out the brand and the company that Quaker decided on the move – all at the height of racial and social tensions in the US at the time.

Yet only a short time later, the very mention of “Aunt Jemima” has already come to be considered as shocking and saddening shorthand for racist – and sexist – abuse.

The culprit, as identified by users on social networks and some town councilors, is Luray, Virginia, Mayor Barry Presgraves, whose Facebook joke suggested that Aunt Jemima was leaving the pancake business to join Joe Biden’s Presidential campaign.

Whether Presgraves meant to be funny when he in this way commented on the possibility of Biden making a black woman his running mate in the November presidential election remains to be clarified – because the mayor seems to have been forced into hiding after facing an avalanche of criticism online, including calls for his resignation.

Given Biden’s age and cognitive ability, which is suspected by many to be questionable, it’s hardly surprising that his choice of candidate for vice president is garnering a huge amount of interest and commentary – but the way the mayor of this small Virginia town has expressed it has been “ruled” impermissible.

Luray Council member Jerry Dofflemyer is the one who described himself as “saddened, disappointed and shocked” by Presgraves’ post.

Another councilor, Jerry Schiro, said that all “racial” comments are now inappropriate in America, because of “the heightened sensitivity to racism.” He also made sure to distanced himself and the council from the mayor, no doubt aware of the rise of social media-driven cancel culture, even over bad jokes. 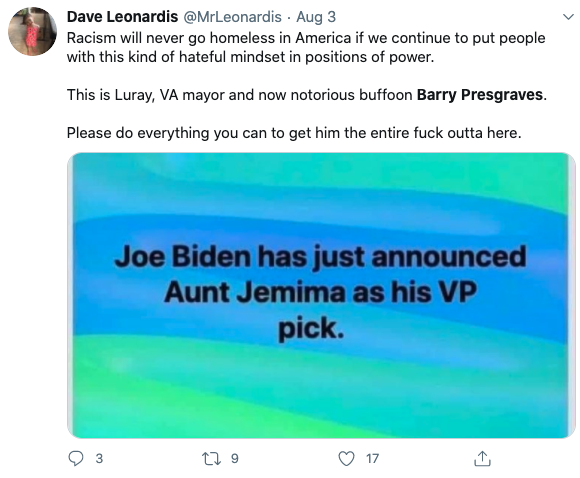 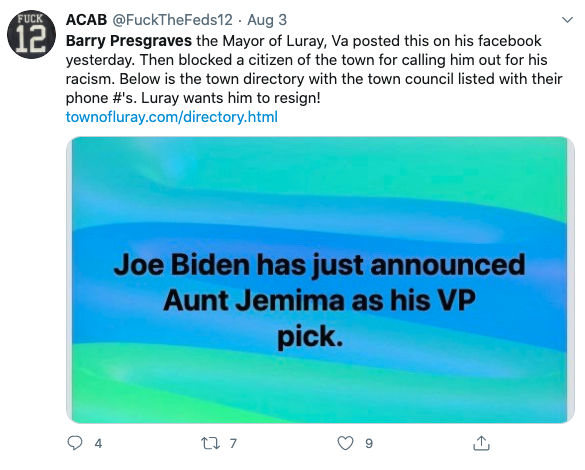 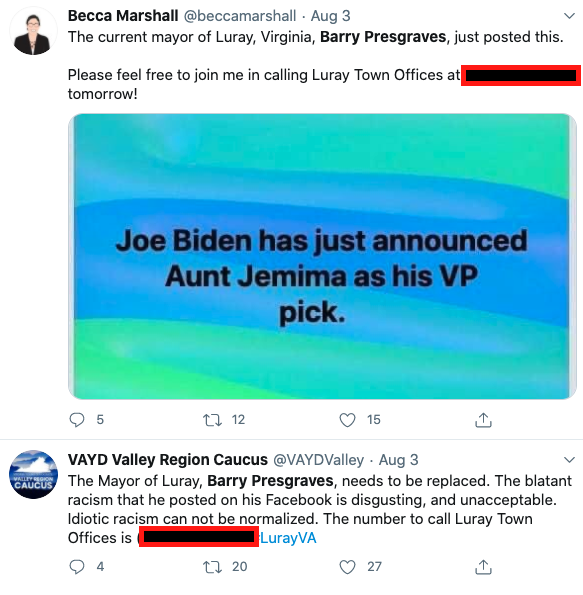 Council member Joseph Sours, however, would like to give Presgraves another chance – once the mayor has apologized.