Thousands of users have left the site, many high profile figures have criticized the ban, causing many to critically examine the fan funding market as a whole.
Share 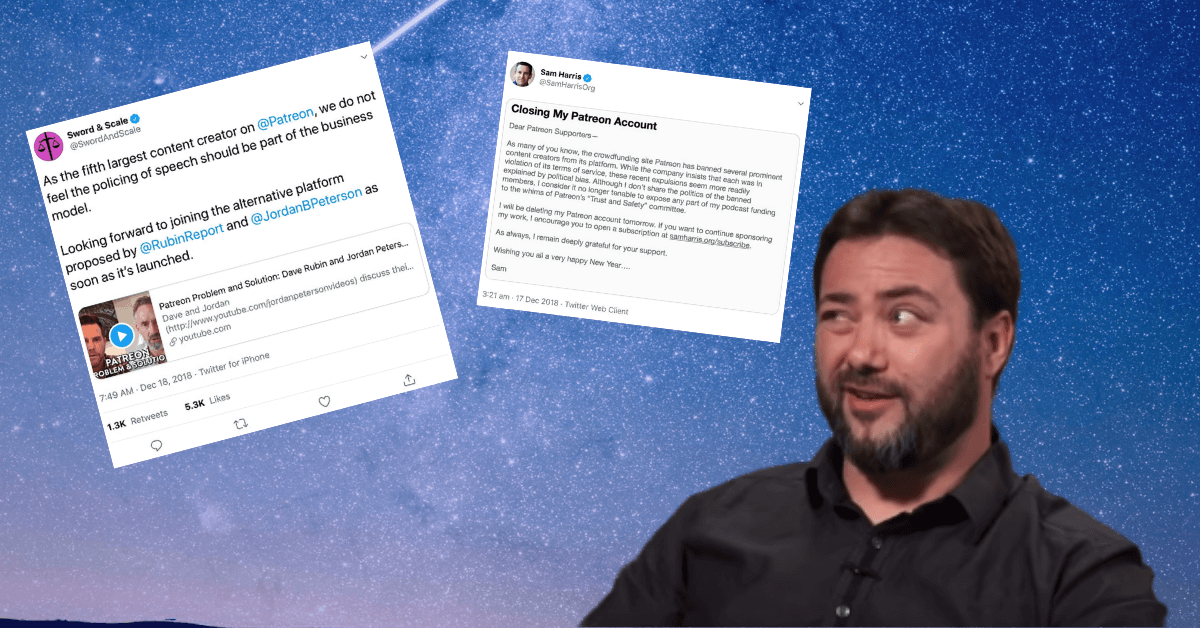 • It’s been three weeks since Patreon, a fan funding website, banned content creator Sargon of Akkad from its platform

• Thousands of users have left Patreon since Sargon was banned

• The ban has also led to greater scrutiny of Patreon, its policies, and the fan funding market as a whole

On Dec 6, 2018, Sargon of Akkad (real name Carl Benjamin), a content creator who covers a wide range of topics, was permanently banned from Patreon, a site that allows content creators to receive donations from their fans.

Since the ban, Patreon has received a huge backlash from the creator community. Thousands of users have left the site, many high profile figures have criticized the ban, and the move by Patreon has caused many people to critically examine the fan funding market as a whole.

But what have we learned from this ban and the attention its generated?

In this post, we’ll be breaking down the key insights from this Patreon vs Sargon saga and discussing what it means for the fan funding market in 2019.

1. Patreon Has No Consistency

One of the main things we’ve learned since Sargon was banned is that Patreon doesn’t apply any consistent standards when taking action against content creators. Some creators are banned from the platform without appearing to have broken any rules whereas others are allowed to remain on the platform despite clearly violating Patreon’s community guidelines.

This was something that a lot of people highlighted when Lauren Southern, a content creator and documentary producer, was banned from the platform in 2017. However, after Southern was banned, the Patreon CEO Jack Conte managed to reassure many of those who were concerned by promising to introduce an appeals process that would treat creators fairly and give them a second chance going forward.

Unfortunately, the recent developments with Sargon show that Jack Conte was not being sincere and that Patreon will go against the words of its CEO and its own community guidelines.

Sargon was given no warning before he was banned and when Patreon published a blog post explaining why he was banned, it just highlighted even more clearly how inconsistent the company is when deciding to take action against creators.

Even if you don’t like Sargon or don’t approve of what he did to get banned, this is still a big issue for content creators because it shows that if you use Patreon, your account is never safe. This pattern of behavior from Patreon has shown that the company is willing to terminate creator’s accounts at any time and for any reason, despite what its community guidelines say.

2. The Backlash Against Patreon Goes Beyond Political Content Creators

On the surface, it appears that the backlash against Patreon is only affecting political content creators and their fans. Sargon’s videos often focus on political topics and many of the high profile creators who have left Patreon or publicly criticized the company’s decision to ban Sargon often produce political content.

However, if you dig a little deeper, it’s clear that this backlash has a much wider reach and many large creators who don’t publicly talk about politics are being affected.

For example, the creators of the true-crime Sword and Scale podcast have announced that they will be leaving Patreon when Jordan Peterson and Dave Rubin’s Patreon alternative goes live. They’re currently the fifth largest creators on Patreon according to data from Graphtreon but don’t want to use the platform long-term because it polices speech.

The YouTube channel Wranglerstar, which focuses on modern homesteading and has over 1 million subscribers, also recently published a video asking fans of the channel to refuse to do business with Patreon.

These are just two of the many examples of creators outside of the political sphere who are responding to the banning of Sargon and pulling their support of Patreon.

3. The Patreon Backlash Is Reflective of a Larger Problem

Patreon’s inconsistent policies and actions are a large part of why it’s receiving such a strong, negative reaction from the community. However, the company’s recent decisions reflect a much larger problem – most fan funding services rely on PayPal and Stripe for payment processing. This means companies like Patreon are often forced to make decisions that please their payment processors.

In the past, Patreon has referenced how important it is for the company to maintain a strong relationship with PayPal and highlighted that around half of all Patreon pledges are made through PayPal.

We only need to look at what happened to the Patreon alternative SubscribeStar to see how catastrophic getting on the wrong side of PayPal can be for businesses. And this is just one example. PayPal has blacklisted many other companies that allow their users to send donations to each other in the past.

So, the censorship, uncertainty, and other similar problems in the fan funding space stretch far beyond Patreon. The real problem is that the fan funding market is largely controlled by the payment processors PayPal and Stripe. Stripe, like PayPal, have banned businesses that allow fans to fund creators. Since there isn’t enough competition, these two payment processors virtually control the market and can decide who gets access to payment processing services and who is blocked from doing business.

Where Does The Fan Funding Market Go From Here?

It’s difficult to predict where the fan funding market goes from here. The market is currently very centralized and it’s not clear what the best path to a more free speech focused, censorship-resistant market will be.

However, the principles of diversification, decentralization, and using free speech focused companies should act as a guiding light and move the market in the right direction.

Diversification means using multiple products and services to support your fan-funding efforts. By doing this, you’ll always have alternative funding options that you can quickly switch to and never be reliant on a single product or service to operate your business.

Decentralization means using products and services that take the control of funding and content distribution away from third parties and give that control back to individual content creators. When you use these products and services, third parties have very little control, so it’s much harder for them to intervene and stop you processing payments or distributing content.

Decentralized products and services in this space are still in the early stages but some good options you can start adding to your fan-funding portfolio include:

Finally, using free speech focused companies means choosing companies that openly support free speech and take a stand against censorship. By doing this, you’re investing in companies that will protect your right to speak freely through your content and that are less likely to buckle if they’re targeted by activists.

A great way to get started with free speech focused companies is to use some of the companies below to start hosting and distributing your content:

• Gab: A social network that champions free speech and has shown multiple times that it will protect content creators against censorship