The vindication of Zero Hedge

Twitter has unblocked the account of Zero Hedge after acknowledging that it was wrong to ban the account of the wildly popular news outlet. It took Twitter more than four months (133 days to be specific) to admit that they were wrong.

Twitter suspended Zero Hedge’s account after it shared an article discussing Peng Zhou, a virologist at the Wuhan Institute, in relation to the origin of the coronavirus. It was a Buzzfeed writer that reported them to the social media platform. The Buzzfeed reporter suggested that Zero Hedge doxed Zhou, but the information that Buzzfeed accused ZeroHedge of leaking was published openly on the Institute’s own website. 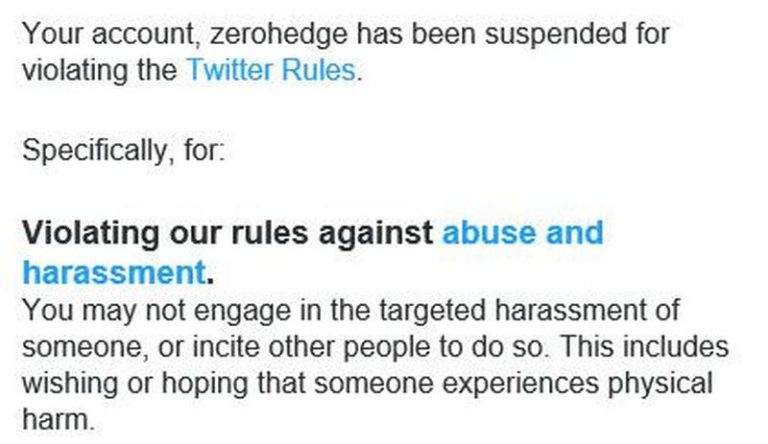 Twitter responded to the doxing claim by suspending the account, citing that it violated policies against harassment and abuse. It is the position of Zero Hedge that they did not harass or abuse anyone. All they did was ask questions.

Zero Hedge’s punishment was tied to the “Innovator’s Dilemma” as they, like with many of their stories, were reporting on the lab before the mainstream media were. This was back when the idea that the virus could have originated in a lab was being smeared as being a “conspiracy theory,” and was still being criticized by media and social networks when anyone brought it up in online conversation.

It is worth noting that three months after Zero Hedge broke the story, western intelligence agencies began investigating the virologist, the Institute, and the lab, validating the questions that Zero Hedge was asking many weeks before.

In an interview with Bloomberg at the time of suspension, Zero Hedge said that the suspension was unwarranted and possibly driven by reasons other than “harassment and abuse.”

“We are confident that we did not violate any of the stated Twitter terms: we neither incited harassment nor did we ‘dox’ the public official, whose contact information is as of this moment listed on the Wuhan institute’s website,” the site’s author “Durden” wrote in the email.

After an appeal, the news site received an email from Twitter on June 12 which said, “we made an error in our enforcement action.” But all this wouldn’t have mattered if Twitter investigated before removing the account, instead of taking a shoot-first-ask-questions-later approach as a knee jerk reaction to Buzzfeed.

Now, Zero Hedge has resumed posting stories on Twitter to an even larger audience. Since it has been back, it has gained more than 30,000 new followers compared to its follow numbers when it was banned by Twitter.