A test of Musk's commitment to free speech.
Share 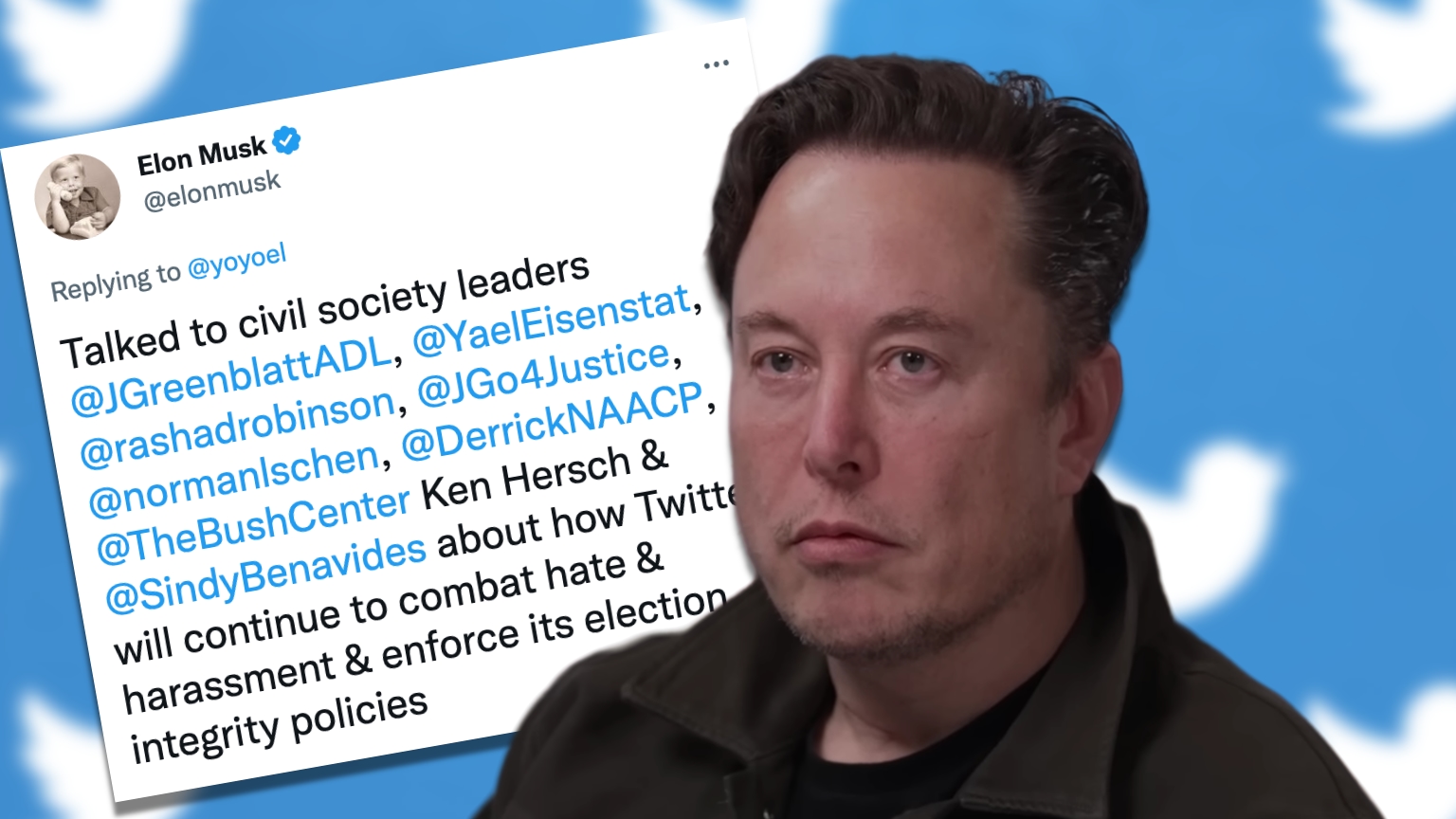 Less than a week after taking the reigns at Twitter, self-described “free speech absolutist” Elon Musk talked with multiple representatives from the Anti-Defamation League (ADL) and other groups that have pushed for increased online censorship to discuss “how Twitter will continue to combat hate & harassment & enforce its election integrity policies.” 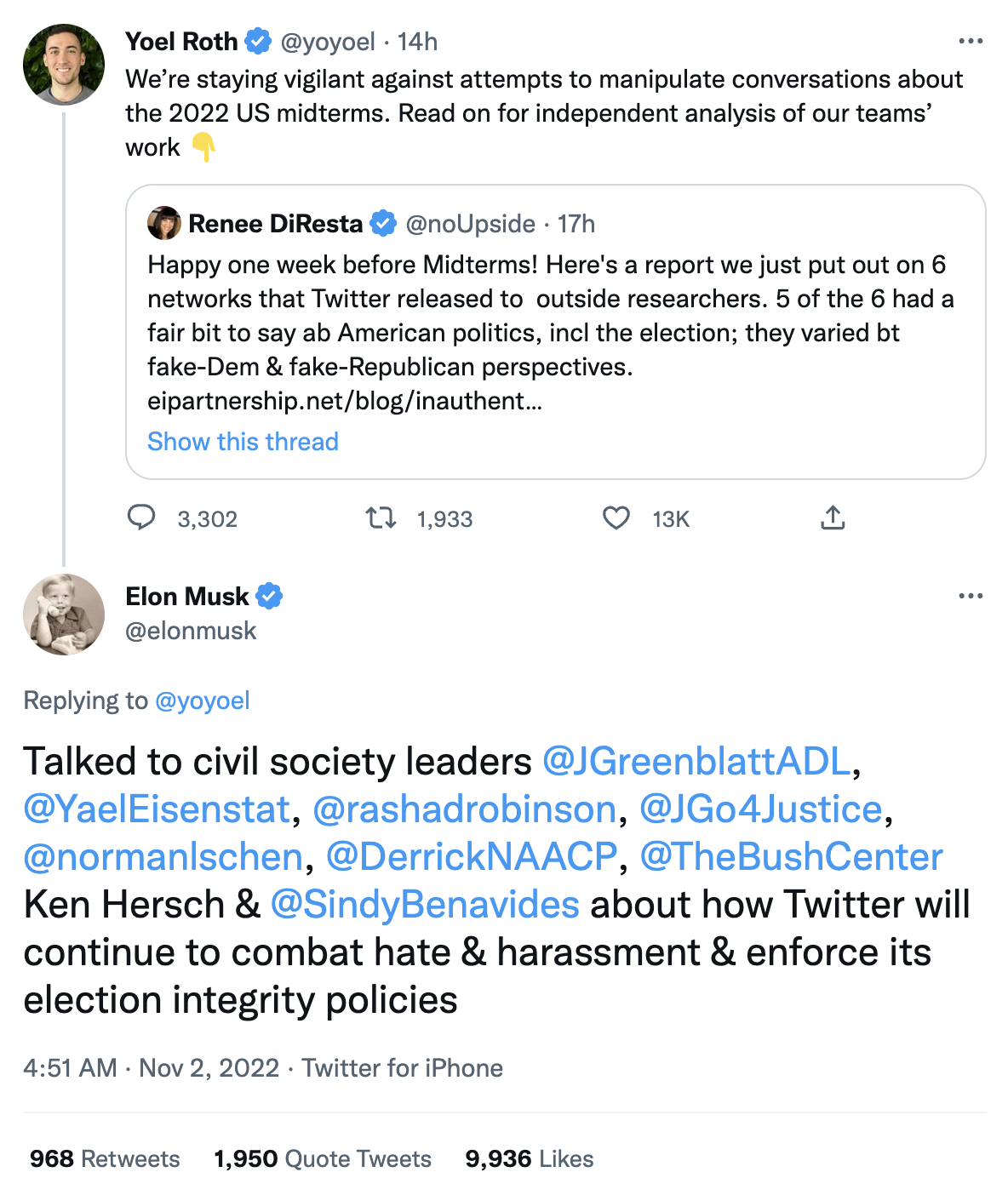 The ADL describes itself as an anti-hate organization and is infamous to free speech supporters for pressuring platforms such as Facebook, YouTube, and PayPal to introduce stricter censorship rules.

Colors Of Change and the NAACP previously worked with the ADL as part of a “Stop Hate For Profit” Facebook ad boycott which ultimately resulted in the tech giant bowing to the pressure and censoring more “hate speech.” Even after capitulating, the ADL insisted that Facebook’s censorship changes were “not enough.”

Free Press recently published a report that complained Big Tech’s existing censorship rules are “weak” and demanded that these companies do more to censor “hate and lies.”

Change The Terms is a Southern Poverty Law Center (SPLC) backed coalition. According to the SPLC, YouTube introduced its controversial hate speech rules in response to Change The Terms. Change The Terms has also branded Signal and Telegram’s end-to-end encryption as “dangerous” because it prevents other groups from being able to police users’ speech.

The George W. Bush Presidential Center has amplified posts that call for”harmful misinformation and disinformation” to be regulated. 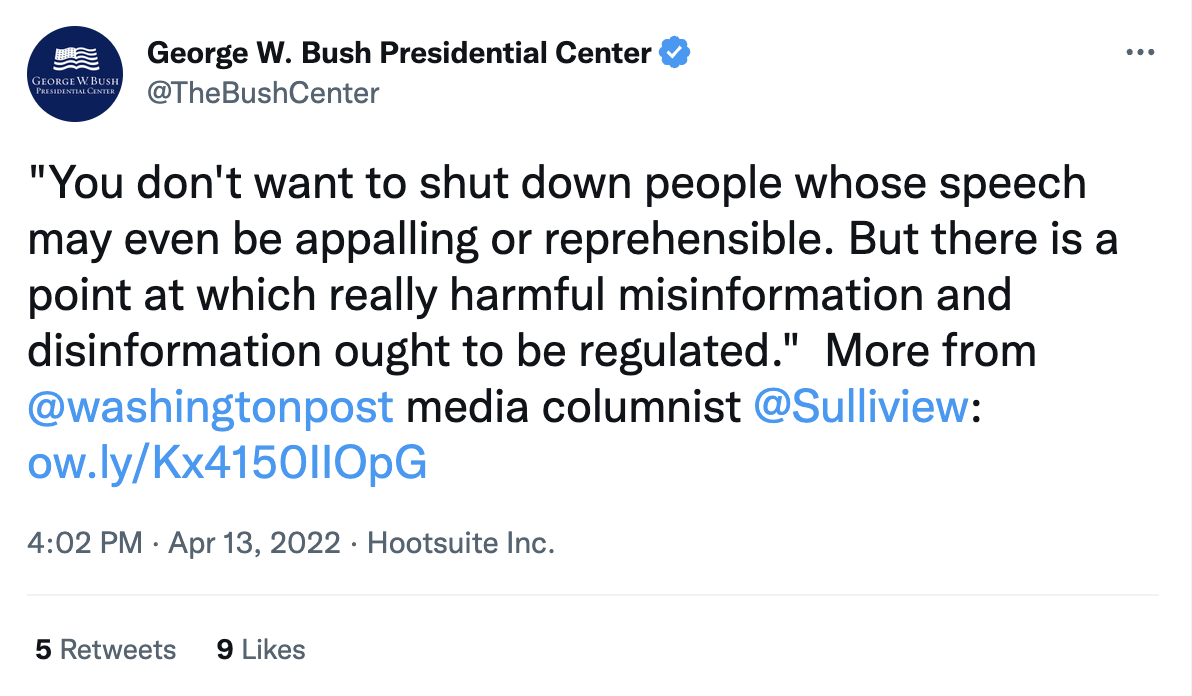 The Asian American Foundation and LULAC attended the White House’s “United We Stand” summit where multiple Big Tech companies agreed to expand their censorship rules. LULAC is also a data-sharing partner in a PayPal-ADL initiative that attacks the revenue sources of those “spreading and profiting from all forms of hate.”

Not only did Musk talk with the leaders of groups that have successfully pressured major platforms into mass censoring content but he also tweeted about the conversation in response to a tweet about supposedly “independent analysis” on Twitter’s efforts to stay “vigilant against attempts to manipulate conversations about the 2022 US midterms.” This analysis was conducted by Stanford disinformation researcher Renée DiResta who has previously pushed for a centralized task force to police the internet.

And it doesn’t end there. Musk also replied to his tweet about meeting with these group leaders with other tweets that re-affirmed Twitter won’t be allowing anyone back on the platform “until we have a clear process for doing so” and that Twitter’s “content moderation council” will “certainly include the civil rights community and groups who face hate-fueled violence.” 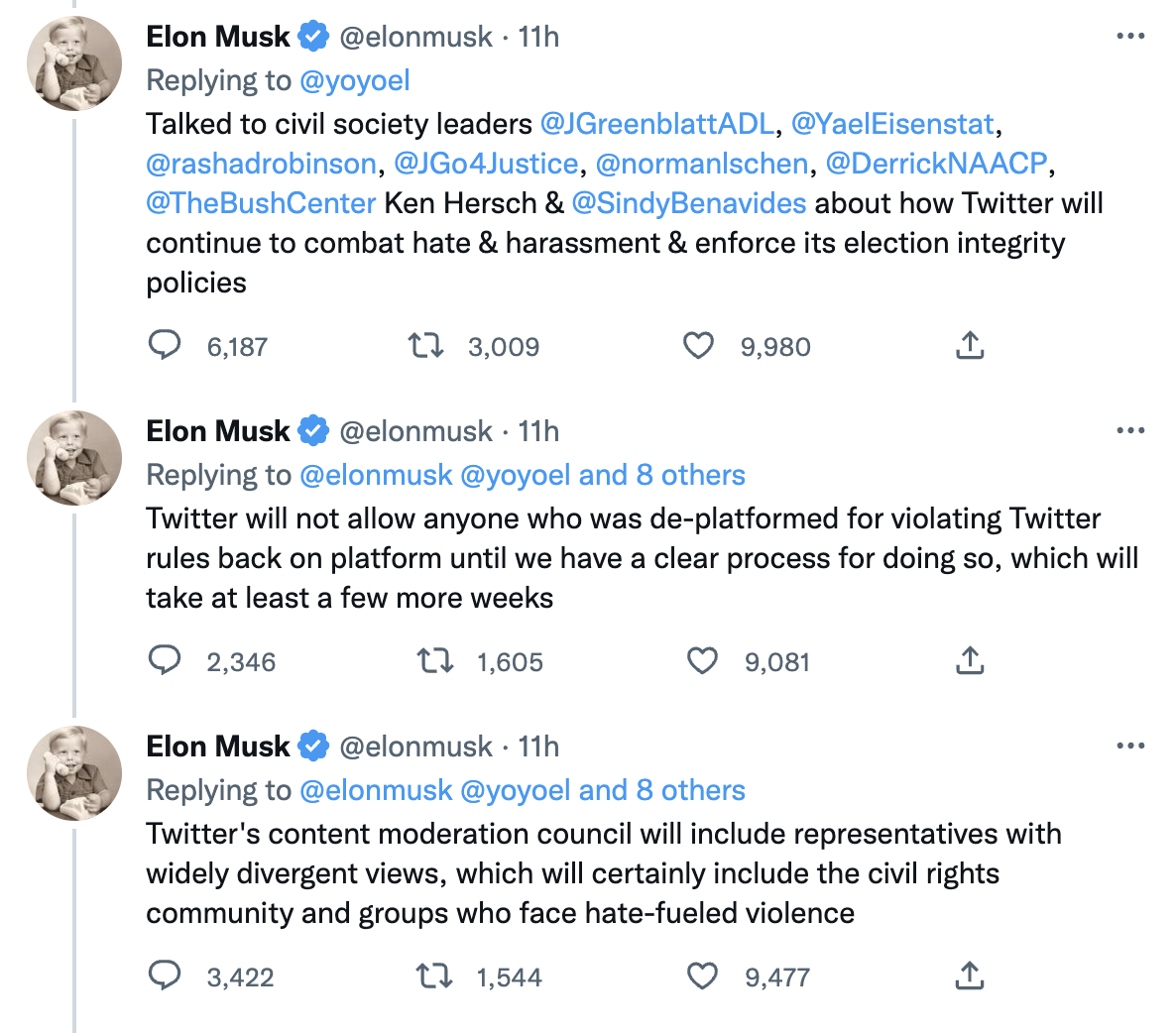 And in a separate tweet, Musk affirmed that “under Elon Musk, Twitter is working harder to thwart hateful conduct.” 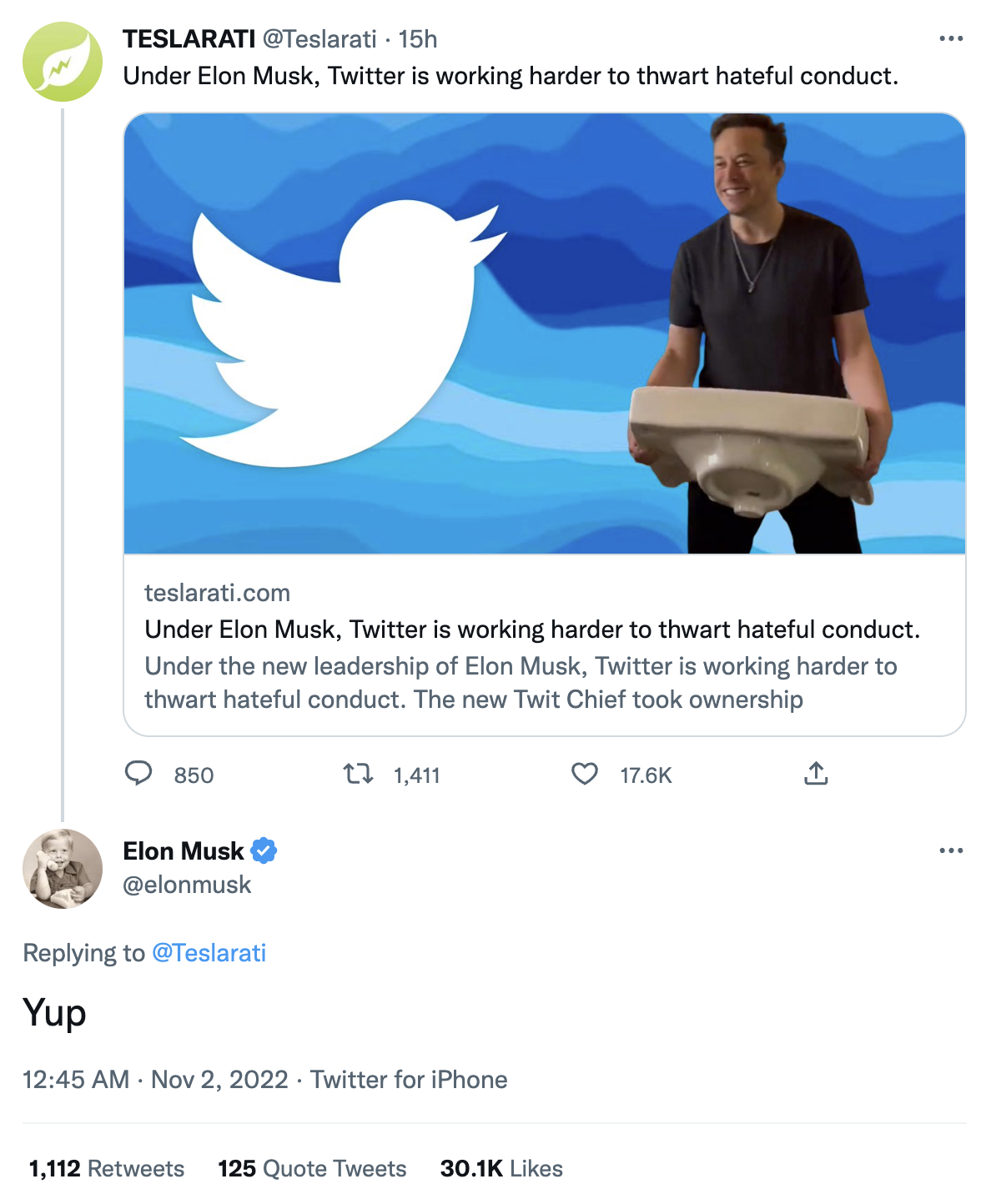 Before buying the company, Musk said he would make free speech changes to Twitter.

But when other platforms have partnered with or bowed to the pressure of the pro-censorship organizations that Musk talked with, it has almost always led to those platforms mass censoring their users. For example, since PayPal — a company that Musk co-founded — partnered with the ADL in 2021, free speech groups, non-profits, independent media outlets, political parties, and more have been deplatformed.