Recently, healthcare workers such as nurses have been blowing off steam by singing or dancing together in viral videos.

In the past month, several videos featuring healthcare professionals dancing have gone viral. While some were deemed courageous, others were deemed outright cringe.

But in one particular case, a group of nurses in England have had to delete their viral video after being accused of “cultural appropriation” when creating a Maori-style tribute dance.

A group of nurses from Tavistock Day Case Theatre in England received over 600,000 views on their video.

“This is the message we wish to affirm, you’ll never beat us we hate you, you germ. Together we’ll triumph with the strength from within. Mankind will destroy you, mankind will win,” one of the nurses shouted.

Rather than some internet users seeing it as a tribute, the video ended up being deleted after the nurses were attacked online for being “offensive” and “insensitive” to take on the Maori culture’s special dance.

“What appears to be headbands is reminiscent of the culturally appropriated Maori dolls and a cultural stereotype that all Maori wear headbands and have a facial tattoo,” said Karaitiana Taiuru, the cultural advisor for Maori.

While pointing out that the performance may even be a potential violation of the Haka Ka Mate Attribution Act of 2014 (that’s a thing), Taiuru expressed harsh criticism against the nurses’ attempt at the Maori ceremonial dance.

“There is no reasonable excuse why any semi-educated person with access to the internet, from anywhere in the world, to not know that mocking another person’s culture is offensive,” said Taiuru.

Taiuru also condemned the video by saying that it was simply “blatant cultural abuse that is verging on racist”.

And some Twitter users seemed to think so too.

“There appears to be a fixation with many people in the UK with Maori culture and what appears to be an inherited colonial perceived right to appropriate Maori culture with marketing of food and beverages and more so in particular to mocking the Haka,” criticized Taiuru.

The nurses removed the video and added an apology. 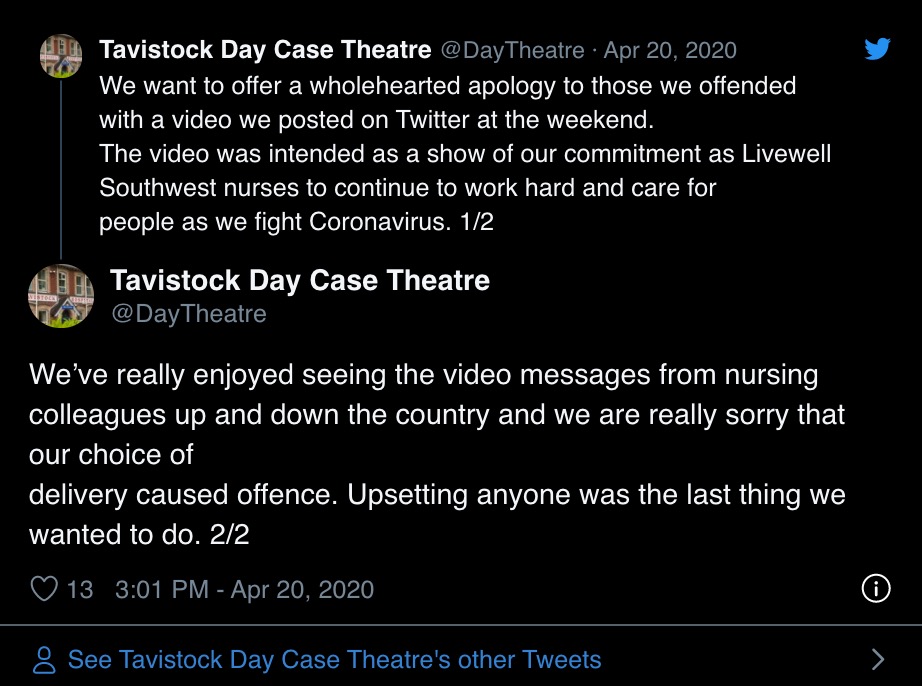